This image shows a factory blast in China, not missiles hitting Eritrea’s capital

A photograph has been shared hundreds of times on social media with claims that it shows missiles hitting Eritrea’s capital, Asmara. The capital was hit by rockets fired from Ethiopia’s rebellious northern Tigray region on November 14, 2020; however, this image actually shows a factory explosion in Tianjin, China, back in 2015.

The image was used in a November 14, 2020 tweet shared more than 260 times which read: “BREAKING: 3 missiles hit #Eritrea capital, #Asmara, hours after senior #TPLF official threatened to strike the country’s cities including #Massawa & #Asmara. Several locations including the Airport and and Ministry of Information reportedly targeted (sic).” 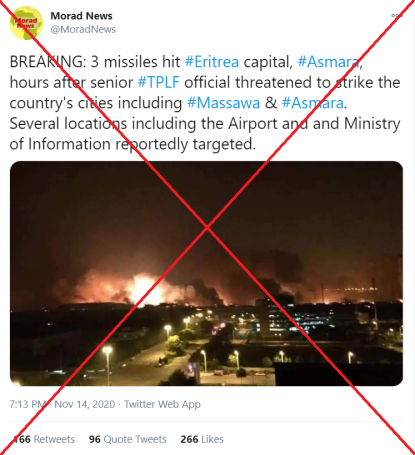 The same photo was also used in a Facebook post with the caption: “TPLF BOMBS ASMARA”. TPLF refers to the Tigray People’s Liberation Front, an opposition party in Ethiopia that governs Tigray.

The image used in the social media posts, however, does not show rockets hitting Asmara. 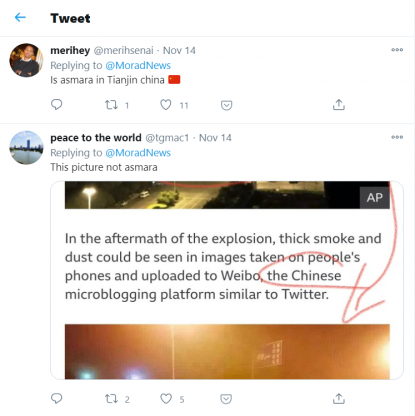 AFP Fact Check ran a reverse image search on the picture and found that it actually shows a massive blast at a factory in China’s northern port city of Tianjin in 2015.

The photograph, which is credited to the AP (Associated Press), was used in numerous articles about the incident at the time, including this one from the BBC.

At least 165 people were killed when a container storage facility with chemicals inside blew up.

The explosions caused more than $1 billion in damage and sparked widespread anger at a perceived lack of transparency over the accident’s causes and its environmental impact.

Another archive photo of a factory blast -- this time in Spain -- was used to illustrate this article by an Egyptian news site about rockets hitting Ethiopia’s Amhara region. On November 14, 2020, the TPLF claimed responsibility for rocket attacks on two airports in the region, which borders Tigray to the south. 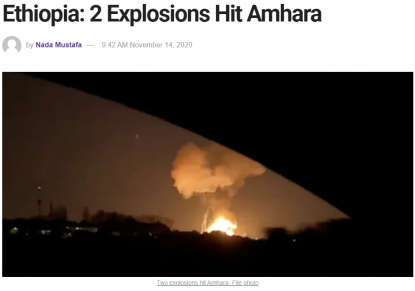 Screenshot from the article, taken on November 16, 2020

The photo caption simply says: “Two explosions hit Amhara - File Photo”. A reverse image search shows that this file photo in question actually shows an image from Reuters in January 2020 -- and that it was not taken in Ethiopia. It’s a still from a video showing an explosion at a chemical factory in northeastern Spain. 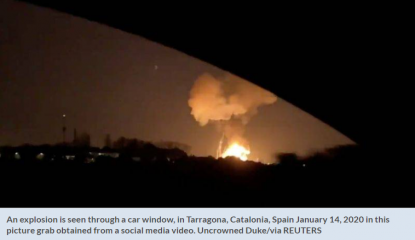 Screenshot from an article about the January 2020 explosion in Spain, taken on November 16, 2020