The video was published here on Instagram on November 6, 2020. 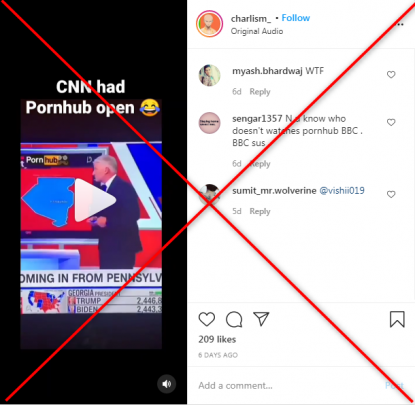 The video, however, has been digitally manipulated.

Below is a screenshot of the video from the misleading Instagram post (L) and the actual CNN broadcast (R):

The manipulation can be seen clearly in this GIF posted by journalist Julian Röpcke on Twitter on November 6, 2020.

A keyword search also found this response from King published on his official Twitter account on November 6, 2020.

In response to a Twitter user who asked him whether the incident was real, King replied: “Not. Some clown taking time away from lying about something else apparently because they don’t like math.”

Not. Some clown taking time away from lying about something else apparently because they don’t like math. https://t.co/IcfHQ3gzDQ