A post claiming to show soldiers patrolling Uganda’s Mbarara city a day before popstar-cum-politician Bobi Wine launched his presidential election campaign has been shared multiple times on Facebook. The claim is misleading: the images were taken by an AFP photographer in 2014 after the US warned Kampala of a possible terror threat at Entebbe International Airport.

A Facebook post published on November 6, 2020, features two pictures of armed troops in a street and a caption that translates into English as: “That’s what's happening in Mbarara (a city in western Uganda) right now ...” 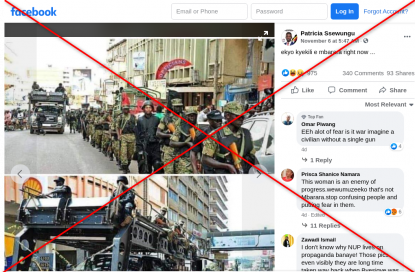 Some online users in the comments appeared to believe that the images were recent and taken in Mbarara city where Wine, a 38-year-old opposition MP whose real name is Robert Kyagulanyi, was expected to launch his official manifesto for the presidential race.

However, a reverse image search on TinEye revealed (here and here) that the pictures were captured by an AFP photographer on July 3, 2014.

The photos show security forces patrolling the streets of Uganda’s capital Kampala after the US had warned of a threat by an unknown group to attack Entebbe International Airport.

“The alert came as travellers flying to the United States from Europe and the Middle East faced tighter security because of new concerns about the development of explosives that could circumvent airport security,” the AFP captions read.

Political tensions in the east African country have escalated ahead of national elections on January 14, 2021. Wine will be challenging President Yoweri Museveni, who has been in power for 33 years.

Wine has become a popular figure among youth in a country where the median age is less than 16.

Since becoming an MP in 2017, he has been routinely arrested and put under house arrest, his concerts banned and public rallies dispersed with teargas.

Museveni, one of Africa’s longest-serving rulers, had the constitution amended for a second time to allow him to run for a sixth term in 2021.

Wine launched his election campaign on November 7, 2020, in Mbarara amid beefed-up security.

The launch came four days after he was detained while registering his candidacy. In televised footage Wine was seen being pulled by police from his car and thrown into a van after submitting his nomination papers to election officials in the capital Kampala. His supporters were then violently dispersed.