An image of two lorries transporting coffins has been shared thousands of times in multiple Facebook posts which claim it shows preparations for Sri Lanka’s second wave of coronavirus cases in November 2020. The claim is misleading; the photo has been circulating online since at least March 2020.

The photo was published in this Facebook post on October 26, 2020. It has been shared more than 5000 times.

The Sinhala-language caption translates to English as:

“Can you see how the preparations are being made? Be careful…” 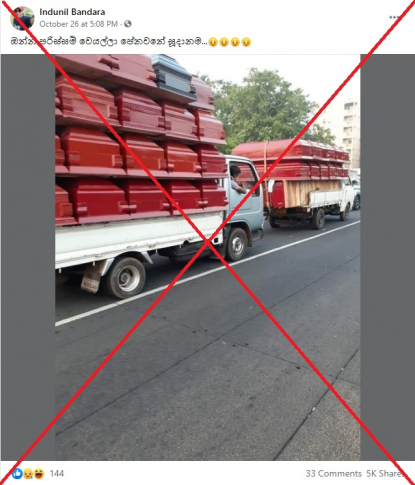 Sri Lanka’s coronavirus infections total rose close to 4,500 in October after an outbreak at a factory near the capital Colombo that makes masks for the US market, AFP reported here.

The majority of new cases were reported in the country’s western province.

The same image was shared on Facebook here with a similar claim.

The claim is misleading; the image has circulated online since at least March 2020.

The Sinhala-language caption translates to English as: “Several lorries that were brought to some funeral parlours in Moratuwa this morning”

Moratuwa is a coastal suburb of Colombo.

A similar claim regarding the origin and context of the photo was published in this post.