This photo shows a mother who tested positive for Covid-19 in Myanmar, according to photographer

A photo that shows a health worker carrying a baby while a tearful woman looks on has been shared thousands of times in multiple Facebook posts that suggest it shows the separation of a mother from her baby in Sri Lanka. The claim, however, is misleading; the photo in fact shows a mother in Myanmar who tested postive for Covid-19, according to the photographer and a local health worker.

The post’s Sinhala-language caption translates to English as: “The nature that stole love…” 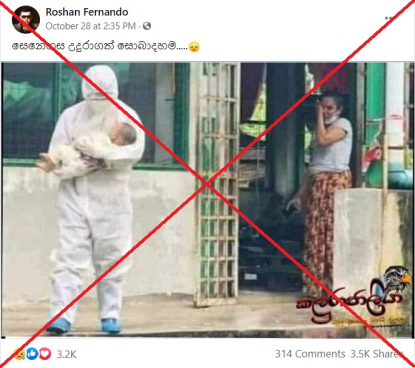 Multiple Facebook users indicated they thought the photo was taken in Sri Lanka, posting comments such as “This pandemic will be eradicated from Sri Lanka soon...That is our belief” and “Idiots. If they locked down the country at the right time, this would not have happened, Curse on those who voted [for this government]”.

Reverse image and keyword searches found the photo was published on Facebook here on October 18, 2020, by a Myanmar-based user who claimed to have taken the photo at this quarantine centre in South Dagon township in Myanmar's largest city Yangon.

The post’s Burmese-language caption translates to English as: “The photo was taken with my phone. Some people have requested my permission to upload the photo on their timeline.

“A mother and her four-month-old daughter were quarantined at B.E.H.S (3) (in South Dagon, Yangon, Myanmar). Swab test results showed that the daughter was negative and the mother was positive. When they were sent to a quarantined room, the mother requested officials at the centre to send her baby back home. We suggested she reconsider her decision because her baby is too young to send away from her mother and will not be allowed to come back to the quarantine centre after the baby is out of the centre. But with a mother's love, she decided to send her baby to her husband not to get infected from the virus.

“One of the members of Thiri Mingalar charity group wore a PPE suit, carried the baby and handed it to the father. But I've heard that there is misinformation spreading related to this photo. I want other people to know the truth behind the photo.” 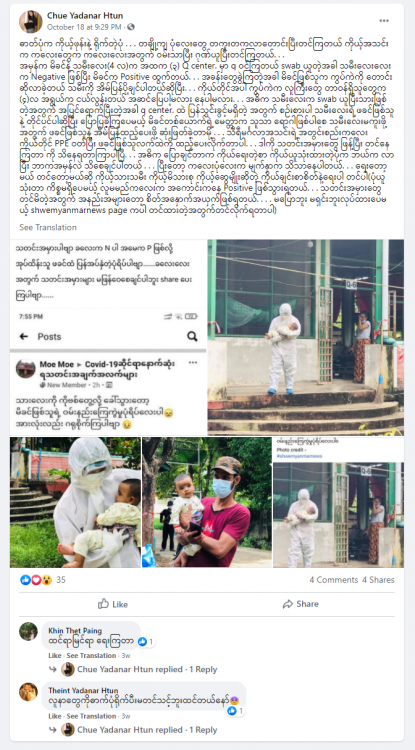 The Burmese comment translates to English as: “Nothing happened to that baby. Its mother tested Covid-19 positive. The child was being sent to its dad."

The photo was also published on another Myanmar-based Facebook page here on October 16, 2020.