This image shows cash seized from a Brazilian politician in 2017, not from Tigray officials

An image of boxes and suitcases full of cash has been making the rounds on social networks in Ethiopia with claims that it shows money seized from officials of the Tigray People’s Liberation Front (TPLF) who were attempting to flee the country amid conflict in the restive northern region. But this claim is false; the image dates back to 2017 and shows money recovered from the apartment of a Brazilian politician.

“Breaking news, TPLF’s shame never ends,” begins the caption in this post shared more than 900 times on Facebook since November 5, 2020. TPLF refers to the Tigray People’s Liberation Front, an opposition party in Ethiopia.

The caption continues: “Following an operation that enabled the commando army to seize one of TPLF’s buildings, many TPLF’s mafia members have been caught fleeing with bags and boxes of money. At this rate, what they have hidden underground will be dug out (sic).”

The image shared with the post shows boxes and cases packed with cash on the floor of a room. 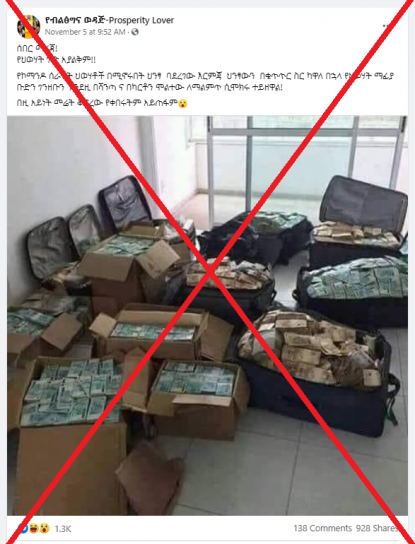 Screenshot of a misleading Facebook post with an image showing a large amount of cash, taken on November 12, 2020

However, the claim linking the money to the TPLF is false. AFP Fact Check traced the image to a cash seizure that happened in Brazil in 2017.

AFP Fact Check ran a reverse image search and found the picture has been online since September 5, 2017.

Screenshot of the search results from a reverse image search on TinEye, taken on November 12, 2020

Using the information provided by search engine TinEye, AFP Fact Check turned to Google with the keywords “September 5”, “2017”, “cash” and “seizure” and found articles referring to an incident in Brazil.

According to this BBC report, Brazilian police discovered “more than $16m in large-denomination notes found in the flat in the city of Salvador”.

“Brazilian police say they have made their biggest-ever seizure of cash in an apartment allegedly used by one of President Michel Temer’s former cabinet members”, it reads. 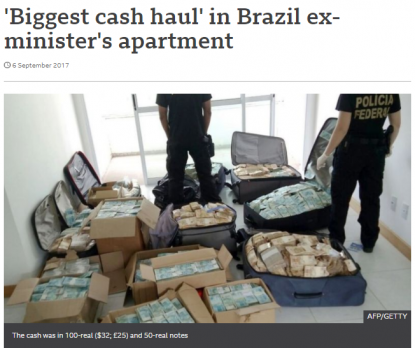 After 14 hours and with seven cash counting machines in action, police put the tally at more than $16 million, AFP reported.

The fortune was tied to former minister Geddel Vieira Lima, who was under house arrest while awaiting trial on obstruction of justice charges. 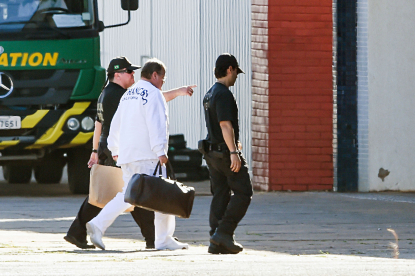 Lima was later sentenced to 14 years and ten months in prison after being found guilty of corruption and obstruction of justice.

The image used in the BBC report is different from the one posted on Facebook; however, noticeable details prove that both were taken at the same scene during the seizure. Indeed, both images were found in AFP's photo archives with captions that show they were shared by the police after their raid on Lima's flat.

Abiy announced on November 4, 2020, that he had ordered an offensive in Tigray. A day later, parliament approved a six-month state of emergency in Tigray where internet and phone connections have been shut down. 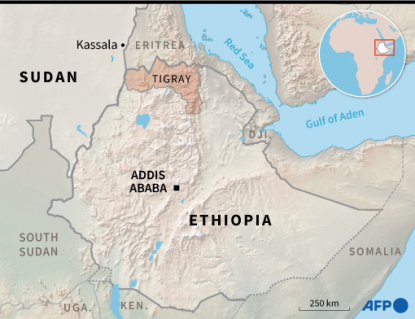 An AFP graphic from November 11, 2020, showing Tigray in the north of Ethiopia

The fighting has seen thousands of people seeking refuge in neighbouring Sudan where at least 11,000 Ethiopians have fled, a Sudanese official told AFP.