A clip from a news broadcast has been shared in multiple Facebook and Twitter posts that claim it shows Pakistani Prime Minister Imran Khan blaming Muslims for recent acts of terrorism in France. But the claim is misleading: the posts share a short, edited extract of Khan’s speech in which key phrases had been cut, changing the meaning of his speech.

The video was posted here on November 8, 2020 by Pakistani channel 24 News, which has more than three million Facebook followers.

The video in the misleading clip shows scenes from a joint press conference with the President of Bosnia which took place on 4th November 2020.

In the clip, the two television presenters say: “A video has gone viral on social media of Prime Minister Imran Khan in which he attributes the terrorism in France to Muslims. The video is of a joint press conference on November 4 with the President of Bosnia, in which Prime Minister Imran Khan is saying that both of us condemn terrorism that has been carried out by Muslims in France.”

The segment then cuts to Imran Khan speaking at the joint presser on November 4.

In the clip, Khan is seen saying: “Also, discussed what’s happening in France. Both of us condemned the terrorist acts by Muslims in France. As all countries would condemn them… that freedom of speech is not used as an instrument to hurt the feelings of any religious community.”

The text box next to Khan translates as: “we condemned the terrorism in France by Muslims - Imran Khan”. 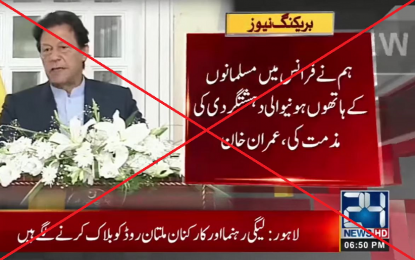 France has been on edge since the republication in early September of cartoons of the prophet by the Charlie Hebdo weekly, which was followed by an attack outside its former offices, the beheading of a teacher and an attack on a church in Nice that left three dead. Here is an AFP report on the attacks.

Demonstrations erupted in several Muslim-majority countries after French President Emmanuel Macron defended the right to publish cartoons of the Prophet Mohammed, seen by many as insulting and an attack on Islam.

Macron's remarks came after a suspected Islamist extremist decapitated a schoolteacher in a Paris suburb in October after he showed the cartoons to pupils during a lesson on freedom of expression.

However, the claims are misleading -- the video has been edited and does not represent Khan’s full comments.

A full version of the speech was posted here by another Pakistani channel GNN.

In the full speech, Khan says: “We also discussed what’s happening in France. Both of us condemned the terrorist acts by Muslims in France. Like all countries would condemn them. But at the same time we felt that for inter-religious harmony it is important that freedom of speech is not used as an instrument to hurt the feelings of any religious community.”

A shorter version of the speech published here on the Prime Minister’s official Facebook shows Imran Khan condemning the terrorist attacks but adding that: “any insult, ridicule, any mocking of the Prophet Muhammad SAW causes the greatest pain to the Muslim community. And European powers, western countries must understand you can not use freedom of speech as a weapon to cause Muslims pain by insulting the Prophet”.