Skip to main content
A newly married couple poses for a wedding photo in Moscow on September 3, 2020. (AFP / Dimitar Dilkoff)

A claim that the Russian government has required polygamy for its male citizens has been shared in multiple posts on Instagram, Facebook and Twitter. This claim is false: polygamy is not allowed under Russian law. The misleading posts appear to be based on a Russian politician’s proposal to allow polygamy that has not been enacted into law as of April 23, 2021.

The Indonesian-language claim translates to English as: “Ten million Russian women are single. The Russian government requires the men there to have two wives or more, and they will be given subsidies.” 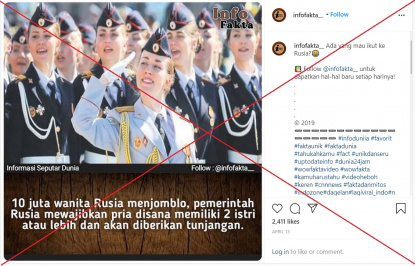 A screenshot of the misleading post, taken on April 21, 2021

However, the claim is false: polygamy is not allowed under current Russian law.

Article 14 of the Family Code of the Russian Federation states: “Completion of marriage is not allowed between the following: persons at least one of whom is already part of a registered marriage.”

The misleading posts appear to be based on a Russian politician’s proposal in 2006 to allow polygamy in the country.

A report published by Russian media organisation RBC on January 13, 2006, quotes the politician, Vladimir Zhirinovsky, saying that polygamy “should be welcomed and extended to the whole of Russia, since we have 10 million single women”.

The proposal was not enacted, according to this Twitter thread by RBTH Indonesia, part of the Russian state-owned media organisation Russia Beyond, on March 21, 2021.

“The ‘comments’ of one member of parliament can of course not be said to be the official ‘position’ of a country. This means that Russia has never supported the idea at all,” RBTH Indonesia tweeted.

It added the claim that Russia has required men to practice polygamy is “100% NOT TRUE”.

AFP has previously debunked misleading claims about polygamy in Eritrea and Malaysia.