The image was published here on Facebook on November 4, 2018, by a page with more than 1.25 million followers.

The post’s Malaysian-language caption translates to English as: “Special allowance for polygamy”. The image shows the Minister of Finance Lim Guan Eng on the left and an infographic in a red box on the right.

The Malay-language infographic translates to English as:

The infographic has an icon of three figures in ties and name tags at the bottom.

The claim is false; no such allowance was announced in Malaysia’s 2019 budget here.

At the one-hour, 44-minute mark, a similar graphic to the one in the misleading posts is shown.

Below is a side-by-side comparison of the misleading Facebook post (L) and the video of the budget presentation at this point (R):

The original government infographic translates to English as: “Special payment of RM500 for civil servants grade 54 and below will be paid by end of December. Special payment as much as RM250 to the government pensioners. Total = RM1.076 billion”.

This is supported by the official 2019 budget document here. 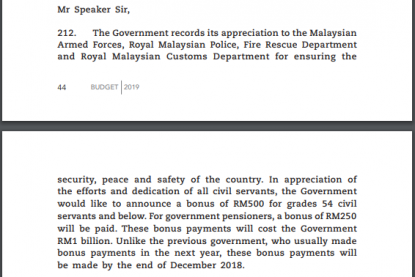