A photo purporting to show South Korean President Moon Jae-in on the cover of TIME magazine has been shared in Facebook posts claiming the purported cover is a criticism of his government. However, the cover has been doctored and does not correspond to a genuine edition of TIME magazine. The cover text appears to have been taken from a New York Times article.

It purports to show President Moon Jae-in on the cover of TIME magazine.

The text on the purported cover reads: “Naeronambul: If they do it, it’s a romance; if others do it, they call it an extramarital affair.”

The Facebook post’s caption states: “The great person who gave birth to a new word: Naeronambul?!” 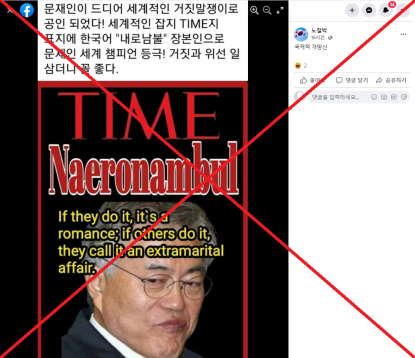 “This idiot lunatic became famous internationally! But our national prestige has plummeted because of you! Isn’t that right?” one wrote.

The same picture was also shared on Facebook here, here, here and here.

The photo’s caption reads: “Frowning Moon Jae-in: Moon Jae-in, head of the New Politics Alliance for Democracy’s election strategy committee, frowns at a lawmakers’ meeting at the National Assembly on the morning of the 11th.” 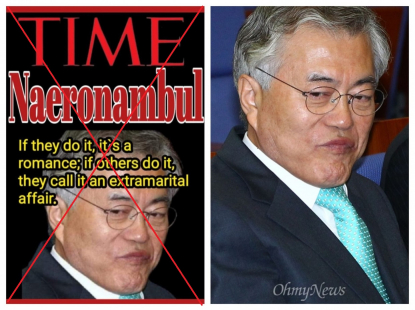 A further search on Google of the keywords in the doctored photo found they correspond to a portion of a report published by the New York Times here on April 7, 2021.

The report reads in part: “South Koreans expressed their growing cynicism over what they considered the hypocritical practices of Mr. Moon’s progressive allies with a popular saying: naeronambul. It roughly translates to, ‘If they do it, it’s a romance; if others do it, they call it an extramarital affair.’​”

A search on TIME magazine’s online database here did not find the purported edition shared in the misleading posts.

However, Moon was featured on the cover of TIME magazine on May 15, 2017 shortly after he was elected president. The cover can be viewed here. 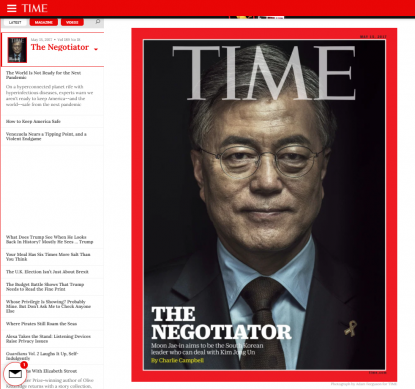