Multiple Facebook and Twitter posts have shared an image they claim shows Britain’s Queen Elizabeth II and her late husband Prince Philip sharing a laugh at Buckingham Palace after he “pranked” her by dressing as a guard. This claim is misleading: the image has previously circulated in media reports about the royal couple laughing after a swarm of bees interrupted an event they were attending. In the photo, Prince Philip was wearing the uniform of the Grenadier Guards, of which he was a long-time colonel.

Its caption reads: “Marriage is based on a good belly laugh. A favourite photo of The Queen and Prince Phillip. He had decided to prank her by dressing as a guard when she was returning to Buckingham Palace.” 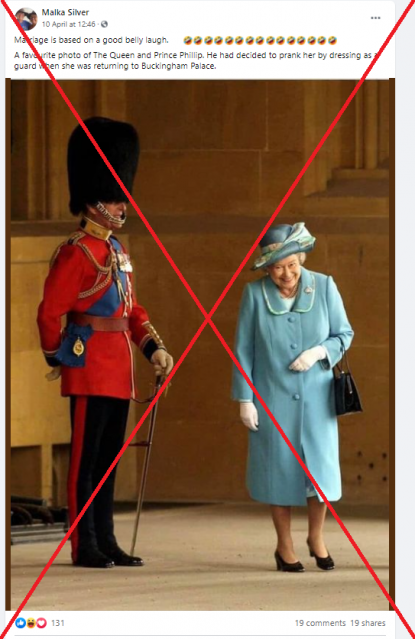 The post circulated online the same day news broke worldwide that Prince Philip had died. AFP reported on his death here on April 9, 2021.

The image was also shared with a similar claim on Facebook here, and on Twitter here and here.

The image, however, has been misrepresented in the posts.

A reverse image search on Google found the image was published here by UK newswire PA Media on April 15, 2003.

Its caption reads: “Her Majesty The Queen and Prince Philip enjoy the spectacle, as a swarm of bees cause concern prior to The Queens Company Review at Windsor Castle.”

A screenshot of the image on the PA Media website, taken on April 22, 2021

Although the swarm interrupted the ceremony, the Queen “looked clearly amused but unflustered” according to an accompanying report by PA Media published here on April 16, 2003.

Chris Young, the photographer who captured the image, described the moment in a BBC interview on April 10, 2021.

He told the BBC: "I got lucky. I recognised that it was a human moment. She was giggling like a little girl and he was laughing too.

"I thought the reaction from both of them was pretty unique.”

Prince Philip was not wearing military uniform as a “prank”, as the misleading posts claim.

He was wearing the uniform of the Grenadier Guards, an infantry regiment of the British Army, of which he had been colonel since 1975.

The Prince wore the uniform throughout his life, as seen in photos from 1978, 2006 and 2016 published by Getty Images.