A post shared more than a hundred times on Facebook claims that the Eritrean government passed a law forcing men to marry at least two wives or face imprisonment. This is false; this is an old hoax that has circulated online since at least 2016 and has recently resurfaced. Contacted by AFP Fact Check, the Eritrean Minister of Information dismissed this claim once again.

“Republic of Eritrea orders men to marry two wives or be jailed. I’m relocating...” reads the caption of a Facebook post published on January 7, 2021.

The post was shared from a page based in Nigeria named “George Udom,” which posts pro-government content and has nearly 200,000 followers. AFP Fact Check has previously debunked false claims shared by this account here and here. Similar accounts with the same name and display photo also exist here and here. 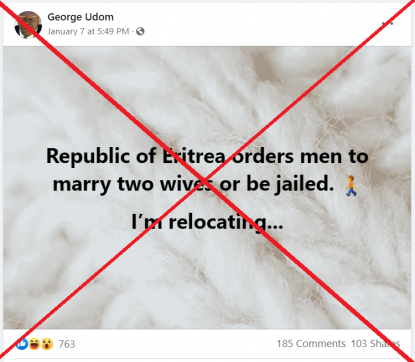 The claim was also widely shared in French on Facebook (here, here and here) as well as on Twitter (here, here, here). AFP Fact Check debunked it in French here.

There is no truth to these rumors -- this is a hoax that has been circulating online at least since 2016.

The rumor claiming that polygamy will be enforced in Eritrea has resurfaced many times since it was originally published by Kenyan news site The Standard under its “Crazy World” section in 2016 (the article, archived here, was later deleted). The false claim was quickly picked up by other African news websites and published as real news (here and here).

A humorous doctored image of an overcrowded bus headed to Eritrea went viral shortly after the hoax appeared online. 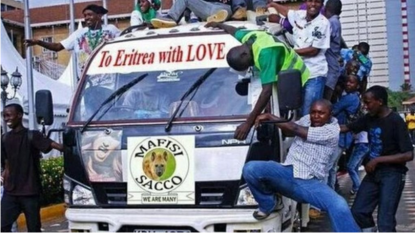 Media frenzy to parrot this ludicrous, fabricated & trite story of the Mufti's presumed religious decree on mandatory polygamy is appalling

In another tweet dated the same day, Yemane called out the author of the hoax and said “the story illustrates vileness of z dark forces of disinformation & proclivity of others to readily embrace z negative narrative on Eritrea (sic)”.

The Standard issued a clarification shortly afterwards, saying that the article was “written in jest as an entertainment piece” and that in Eritrea, polygamy is not obligatory.

Contacted by AFP Fact Check, Yemane refuted these claims once again in an email sent on January 26, 2021.

“This is an old hoax story that was published five years ago; in January 2016. The magazine subsequently retracted the story with an apology. This was a deliberate and irresponsible lie by the author who wrote the fabricated story for commercial gains; to “get a lot of clicks and attract more readers. I do not see any point in dwelling on the story today, five years later,” he wrote.

Polygamy is the practice or custom of having more than one wife or husband at the same time, which is common in Africa and in some countries in the Middle East, as seen in this map by the Pew Research Center. 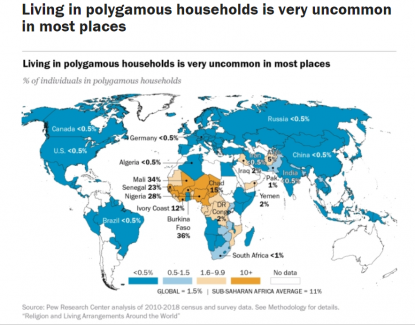 The Pew Research Center explained that polygamy is rare around the world and mostly confined to a few regions. The map also shows that no data for Eritrea was collected.

According to the Organisation for Economic Co-operation and Development (OECD), the pratice of polygamy has declined in the last decade but remains common in West Africa. Screenshot of an OECD map showing laws on polygamy in West Africa, taken on January 27, 2021