Skip to main content
A medical assistant vaccinates a resident of a nursing home with an injection of the Pfizer-BioNTech Covid-19 vaccine at the nursing home for seniors 'Schmallenbach Haus' in Froendenberg, western Germany, on January 22, 2021. (Ina FASSBENDER / AFP)

A screenshot of an article about the Pfizer-BioNTech Covid-19 vaccine being administered in Germany has been shared repeatedly in multiple Facebook and Twitter posts that emphasise ten people died after receiving a vaccine dose. The posts present the vaccine drive in a misleading context: multiple medical experts have said the current evidence indicates the deaths were not directly linked to the vaccines. As of January 27, 2021, scientists say there is no evidence that links the deaths with Covid-19 vaccines.

The screenshot was shared on Facebook here on January 19, 2021. 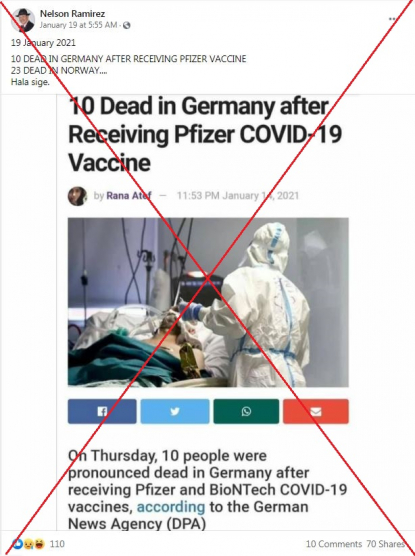 A screenshot of the misleading post, taken on January 26, 2021

The post prompted comments from some Facebook users in the Philippines who expressed concern about the vaccine's safety.

One posted: "Pfizer is dangerous…  we are at risk here”. Another Facebook user wrote: “The WHO will kill you”.

The posts, however, present the vaccine drive in a misleading context.

Dr. Susanne Stöcker, a spokeswoman for the Paul Ehrlich Institute, told AFP that although 21 deaths have been reported in Germany following Covid-19 vaccines administered since late December 2020, investigators found they were not linked to the inoculations.

“For these 21 cases, no causal relationship to vaccination has been shown,” Stöcker said in an email on January 25, 2020.

Keyword searches on Google found that the article shown in the posts was published by Egypt-based magazine Sada El-Balad English here on January 14, 2021.

Although the article's headline is misleading, the report itself correctly states that medical experts found no direct link between the deaths and the vaccinations.

The report's third paragraph, which is excluded from the screenshot in the misleading posts, accurately states: “According to medical sources, the complications of the diseases they had are the main reason for their death, not the vaccines.”

Below is a comparison of the screenshot in the misleading posts (L) and the Sada El-Balad English article (R) with the omitted portion highlighted in red: 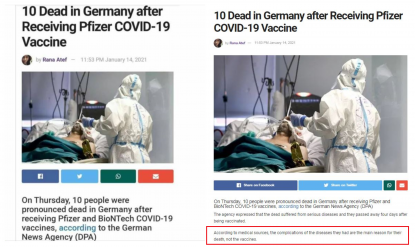 The German News Agency (DPA), which was cited in Sada El-Balad’s articles, also correctly reported that experts at the Paul Ehrlich Institute found the deaths were "unlikely" to be connected to the vaccinations.

“With the 10 deaths reported so far shortly after a corona vaccination, experts from the Paul Ehrlich Institute consider a connection with the immunization to be unlikely,” DPA reported here on January 14.

AFP has debunked the misleading claim that 23 people in Norway were "dead from" the Pfizer-BioNTech vaccine here. Another AFP report published here on January 24, 2021 states experts have found no evidence to suggest Covid-19 vaccines have caused deaths.

“Despite dozens of deaths of people shortly after they were vaccinated against coronavirus, scientists say the evidence available so far does not incriminate the new anti-COVID-19 vaccines,” AFP reported. “Health agencies stress however that the vast majority of post-vaccination fatalities were elderly, already vulnerable and often sick.”