The image shows a woman beaten in India in 2018

A photo purporting to show a Muslim woman attacked by her community for marrying a Sinhalese man in Sri Lanka has been shared in multiple Facebook posts. The claim is misleading; the image shows an incident that occurred in India in 2018.

The claim was shared by this Facebook post from July 3, 2019 and has since recirculated here, here and here. 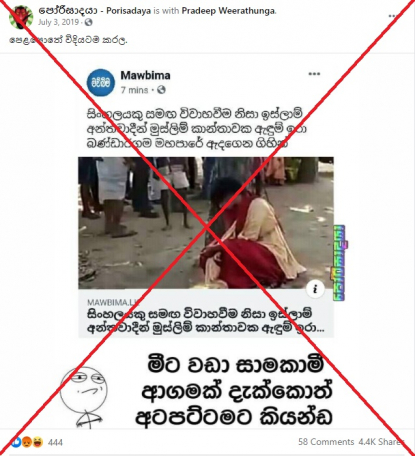 The post features a screenshot of a Facebook post from Sinhala language newspaper Mawbima, which shared an article reporting that a Muslim woman was assaulted by a group of Islamic extremists in a Sri Lankan suburb for marrying a Sinhalese man. The article has since been taken down.

The Sinhala-language headline of the Mawbima article reads: “A Muslim woman from Bandaragama dragged along the road, with her clothes torn by Islamic extremists for marrying a Sinhalese”.

Bandaragama is a town in western Sri Lanka.

The Facebook post’s Sinhala language caption reads: “Seems they followed textbook instructions right down to a T” and the Sinhala text superimposed to the bottom of the screenshot image translates into English as: “If you hear of a more peaceful religion please let Atapattama know”.

Atapattama is a popular TV show in Sri Lanka.

“Even with an exclusively Sinhalese government, do these kinds of events still take place,” one person wrote.

His reference of an ‘exclusively Sinhalese government’ is with regard to the 2019 presidential election, which President Rajapaksa won with a Sinhala Buddhist majority.

“There is no rule of law anymore, good governance and reconciliation has been working well. Truly a country that makes you want to stay,” another wrote.

The claim, however, is misleading. The image featured alongside the article and Facebook posts in fact shows an incident in Bihar, India in 2018.

A reverse image search of the photo led to an article in British newspaper Daily Mail article published on October 8, 2018 that features the identical image in a report about a young woman who was tied to a tree in India after eloping with a man of different caste.

AFP India confirmed this incident occurred in Bihar in 2018 and it was reported widely in multiple Indian media outlets at the time as seen here, here and here.