Skip to main content
Philippine's current Vice-President Leni Robredo (L) along with former president Benigno Aquino (R) flash the Laban (fight) symbol used by the opposition during Marcos' rule, at a mass to commemorate the 35th death anniversary of Aquino's father Ninoy on August 21, 2018. - Ninoy Aquino, one of the opposition leaders during Marcos dictatorship was shot upon arrival from exile at the Manila international airport on August 21, 1983, sparking massive anti-Marcos protests after, that led to their ouster of the Marcoses from power in 1986, in a bloodless people power revolution. (Photo by TED ALJIBE / AFP)

A photo collage has been shared in multiple Facebook posts that claim it shows failed construction projects by a political opposition party in the Philippines. The claim is misleading: while one photo in the collage genuinely shows a bridge in the Southeast Asian country, the second photo has in fact circulated in news reports about schoolchildren in Indonesia forced to cross a river by foot to go to school.

It shows a photo of a bridge that has Tagalog-language caption which translates to English as: "bridge without a river"; and another photo showing children submerged in water, captioned: "river without a bridge". 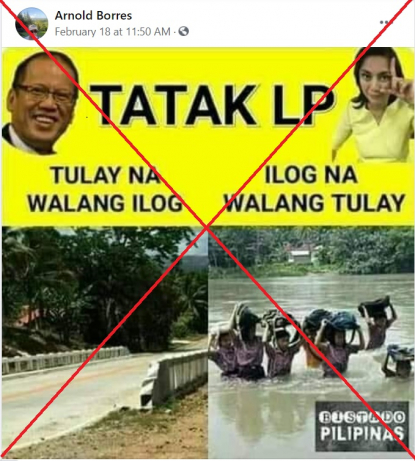 A screenshot of the misleading post, taken on February 22, 2021

An identical photo collage was also shared on Facebook here, here and here alongside similiar claims.

The Aquino III administration has been a frequent target of misleading claims that purport to compare its projects to Rodrigo Duterte’s.

These claims, many of which AFP Fact Check has previously debunked, range from bridge reconstruction, river cleanup and railway projects.

However, one photo in the collage has been shared in a misleading context.

A reverse image search on Google followed by keyword searches found the photo of the children submerged in water in fact corresponds to this Indonesian-language video report posted on March 24, 2018 on Indonesian news website Medcom.id.

“Students in Serdang Bedagai, North Sumatra, have to directly cross fast-moving Buaya River to go to school,” the video’s Indonessian description reads. “The students hope for a bridge they could walk over to get across the river and arrive at school without getting their uniforms wet.”

The video report features one student being interviewed.

“If there is a flood, I sometimes go to school, sometimes not,” the child is quoted saying in Indonesian.

Below is a screenshot comparison of the photo in the misleading collage (L) and its corresponding frame in the Medcom.id video report (R):

A photo showing the same schoolchildren, taken from a slightly different angle, also appears with the same details in this report by Indonesia news website iNews.id.

Further reverse image and keyword searches on Google found the photo in the collage that shows a "bridge without a river" appears in this report by Filipino media organisation Rappler.

The report was published on April 21, 2016 during the presidency of Aquino III.

“An average photo of a national road in Paku, Bontoc in Southern Leyte made rounds on Facebook on April 16,” the report reads. “What made it different from other national roads is that some netizens pointed out it is a ‘bridge with no river.’”

According to the Rappler report, social media users suggested the bridge shows evidence of corruption. A public works official defended the project, saying not all bridges are constructed for rivers only, the report added.

Below is a screenshot comparison of the photo of the bridge in the misleading collage (L) and the photo from the Rappler report (R):

The location of the bridge can be seen here on Google Street View.

The misleading claim has also been debunked by Filipino fact-checking organisation Vera Files.