Skip to main content
Australia's Prime Minister Scott Morrison (C) rolls up his sleeve before receiving a dose of the Pfizer/BioNTech Covid-19 vaccine, as Minister for Health Greg Hunt (L) looks on, at the Castle Hill Medical Centre in Sydney on February 21, 2021. (Photo by Steven SAPHORE / AFP) (AFP / Steven Saphore)

Multiple Facebook posts claim Australian Prime Minister Scott Morrison’s Covid-19 vaccination -- broadcast live on national television on February 21, 2021 -- was faked. The posts claim the doctor who vaccinated Morrison left the cap on the syringe. But the claim is false: the medic used an exposed needle to vaccinate Morrison, photos and video footage of the procedure show.

Morrison was one of the first Australians to receive a Covid-19 vaccine on February 21, 2021, as part of a national vaccination program launch.

The post’s caption reads: “Scomo [Scott Morrison] allegedly getting ‘the jab’ with one very obvious problem - the cap’s still clearly on it. These publicity stunts are getting sloppy. #nojabnojob” 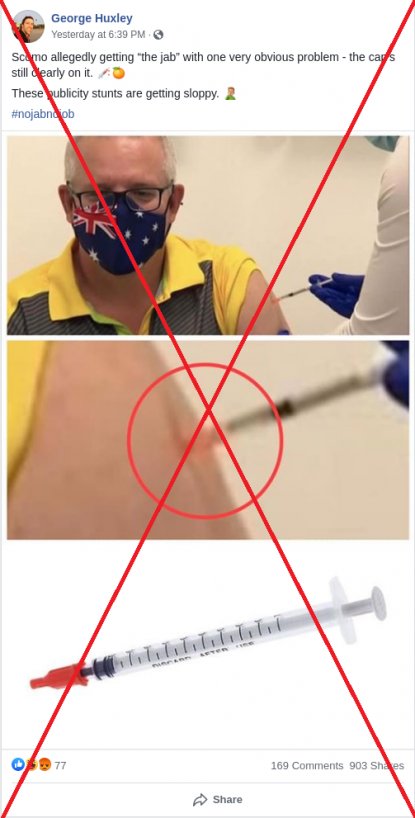 Other posts with a similar claim were shared on Facebook here and here.

Video footage and photos of the event clearly show an uncapped needle being inserted into Morrison’s arm.

Below is an AFP photo of Morrison's vaccination that shows the exposed needle tip. 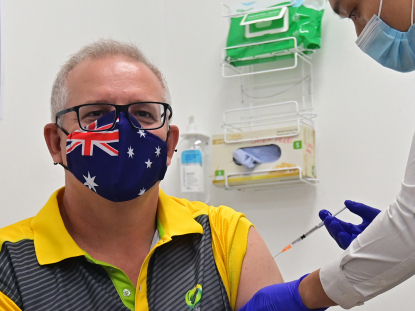 Live video footage taken from different angles of Morrison receiving the vaccination was aired on ABC News, 7 News, and 10 News.

Below are stills of Morrison’s vaccination, also showing an exposed needle tip, as shown on the 10 News footage.

In response to an inquiry from AFP about the misleading posts, Dr Nigel Grebert from Castle Hill Medical Centre said the needle was uncapped when Morrison received his vaccination.

“From the photos it’s pretty clear he had a 1ml syringe with a 25 gauge needle attached. Clearly no lid,” he said in an email on February 23, 2021.

“And if anyone tried it with the cap still on within metres of about a dozen news crew, camera and health professionals it would be absurdly obvious... like worse than [a] C-grade TV show.”

A Google search of a “25G needle” found listings for hypodermic needles here and here on medical supplies websites. Both show a needle tip is visible above the orange plastic base. 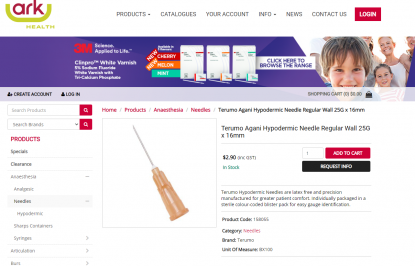