No, both of these photos circulated online years before Rodrigo Duterte’s presidency

A photo collage has been shared repeatedly in multiple Facebook posts which claim it shows that a polluted river in the Philippines has been cleaned up following the election of Rodrigo Duterte as president in 2016. The claim is false; both photos have circulated online since at least 2011, five years before Duterte became president; the photos show a tributary of the river cited in the posts. 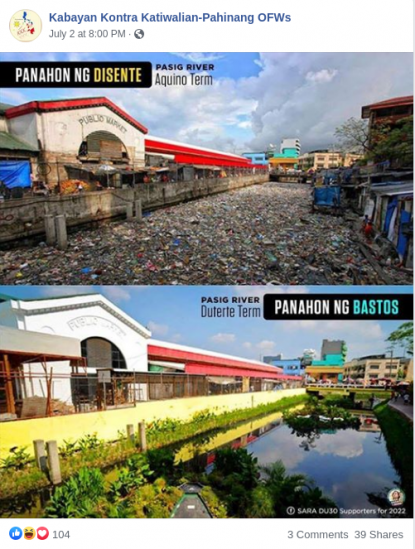 The first photo, which shows a rubbish-filled body of water, bears a Tagalog-language text overlay that translates to English as: “DURING THE TIME OF DECENT PEOPLE / PASIG RIVER / Aquino Term”.

The second photo, which shows the same body of water without noticeable pollutants, is overlaid with text that reads: “PASIG RIVER / Duterte Term / DURING THE TIME OF INDECENT PEOPLE”.

Combined reverse image and keyword searches on Google found that both photos were published online in May 2011, more than five years before Duterte took office.

They were published in this report by the Asian Development Bank (ADB) about cleanup operations in a Pasig River tributary.

The ADB report states: “A massive cleanup in Estero de Paco, an estuary (sic) of Manila's Pasig River, was conducted. Concrete embankments have been built and running water and septic tanks installed.” 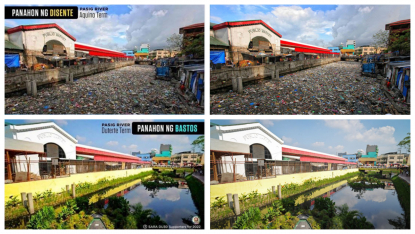 The photos were also published in this September 2012 report by Philippine news organisation Rappler.

The location of the Estero de Paco estuary in relation to the Pasig River can be viewed on Google Maps here.

The misleading use of the photos has also been debunked by FactRakers, a Philippines-based fact-checking initiative.