Several photos of damaged and burning trees have been shared repeatedly in multiple Facebook posts that claim they show deforestation in the historic Sri Lankan city of Polonnaruwa in February 2021. The claim, however, is misleading. Although considerable deforestation was recorded in Polonnaruwa between 2020-21 by Global Forest Watch (GFW), the photos in fact show trees damaged by illegal felling in the region in 2019.

The photos were published on Facebook here on February 9, 2021. 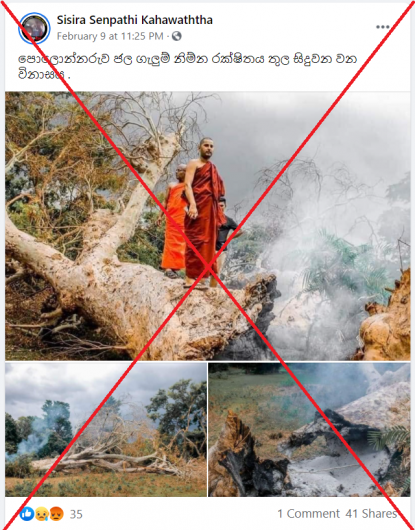 The post’s Sinhala-language caption translates to English as: “The damages currently happening to the Polonnaruwa valley forest cover”.

Polonnaruwa is a historic city in north central Sri Lanka. Much of the city's ancient monuments, gardens and ruins are protected as a UNESCO World Heritage site.

The photos were also shared alongside a similar claim on Facebook here, here, and here.

A reverse Google image search found the photos show damaged trees in Polonnaruwa in July 2019, not in February 2021.

The photos were published in this Sinhala news article published on July 11, 2019. The report is headlined: “The tragedy of the Polonnaruwa valley where state lands are robbed and giant trees are being felled and burnt”. 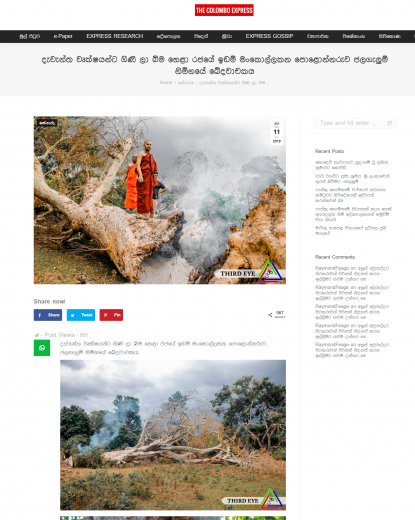 Screenshot of the Sinhala news website article captured on February 23, 2021

Below is a screenshot comparison of the images shared in the misleading posts (L) and photos published in the 2019 article (R): 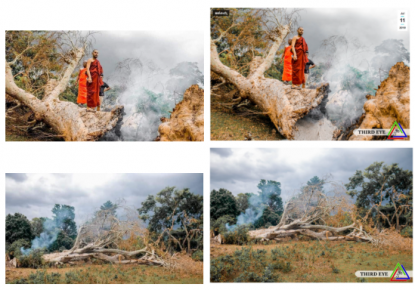 Screenshot comparison of the images shared in the misleading posts (L) and photos published in the 2019 article (R):

The photographer credited in the 2019 article, Umanga Bandara, told AFP that he took the photos in 2019.

“These images were captured in July 2019, when a group of residents and environmental activists visited the area to assess the damage caused in the area by illegal felling of trees,” he told AFP by Facebook message on February 20, 2021.

Between February 24, 2020 and February 24, 2021, Global Forest Watch recorded 3,850 deforestation alerts in Polonnaruwa. Data for 2019 was not available on its website, which is curated by US-based non-profit World Resources Institute.

According to the GFW website, Polonnaruwa lost 485 hectares of humid primary forest between 2002 and 2019, making up 9.8% of its total tree cover loss in the same time period.