This photo was taken in Berlin in 2019, a year before Indian farmers' protests began

An image has been shared in multiple Facebook and Twitter posts alongside a claim it shows a tractor protest organised by German farmers in Berlin in February 2021 to support Indian farmers protesting against new agricultural laws. The claim is false: the photo, taken by Associated Press news agency, shows demonstrations in Berlin in November 2019, a year before Indian farmers' protests began.

The Hindi caption translates to English as: “In solidarity with Indian farmers, the farmers came out with tractors protesting in Berlin city, Germany. No tear gas, no water cannons, this is democracy.” 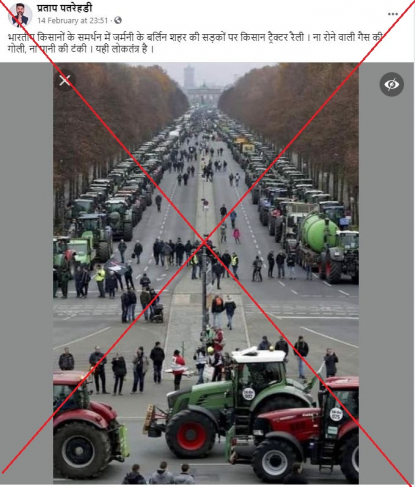 Tens of thousands of farmers from northern India have been protesting against the new agricultural laws near the capital Delhi since November 2020.

A reverse image search on Google found the original photo published here by American news agency Associated Press in a report about farmers’ protest in Berlin on November 26, 2019 against the German government’s agricultural policies.

Below is a screenshot of the Associated Press photo by Michael Sohn: 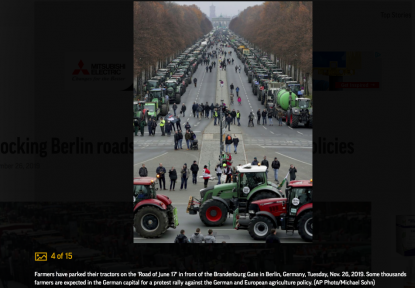 Screenshot of the AP Photo

“Farmers have parked their tractors on a road close to the Victory Column in Berlin, Germany, Tuesday, Nov. 26, 2019. Some thousands farmers are expected in the German capital for a protest rally against the German and European agriculture policy. (AP Photo/Michael Sohn),” the photo caption reads. 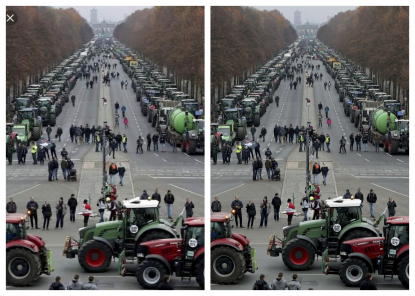 AFP also reported about the farmers’ protests in Berlin in 2019.