These photos have circulated in reports about an earthquake in Turkey in 2020, not Afghanistan

Two photos have been shared in multiple Facebook and Instagram posts that claim they show destruction in Afghanistan following an earthquake in February 2021. The claim is false: both photos were taken from Associated Press reports about an earthquake in Turkey in January 2020.

The photos were published on Facebook here on February 12, 2021. The caption reads: “Shocking, Live pictures from Afghanistan.” 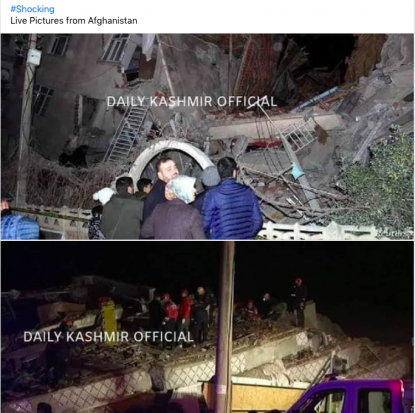 The post circulated online the same day a powerful earthquake struck the central Asian country of Tajikistan. The tremor was felt across the region, including in Afghanistan, as reported by Indian media outlets Times Now and Livemint.

The photos were also shared alongside a similar claim on Facebook here and here; and on Instagram here and here.

Reverse image searches on Google found both photos were published in Associated Press (AP) reports and show the aftermath of an earthquake in Turkey in January 2020.

The first photo was published in an AP report here on January 25, 2020.

The photo’s caption reads: “People look at a collapsed building after a 6.8 earthquake struck Elazig city centre in the eastern Turkey, Friday, Jan. 24, 2020. An earthquake with a preliminary magnitude of 6.8 rocked eastern Turkey on Friday, causing some buildings to collapse and killing at least four people, Turkish officials said.”

The second image appears to be a screenshot taken from footage featured in this AP report published by the Canadian news website Global News on January 24, 2020. The image can be seen at the video’s one-minute 14-second mark.

Below are two screenshot comparisons of photos shared in the misleading photos (L) and AP images published in January 2020 (R): AFP also reported on the earthquake and subsequent rescue efforts in eastern Turkey here on January 26, 2020.