Skip to main content
A person holds a sign reading "Freedom" as truckers and supporters protest against mandates and restrictions related to Covid-19 in Ottawa, Ontario, Canada, on February 5, 2022 ( AFP / Dave Chan)

Social media posts claim a dumpster full of rocks was placed in central Ottawa by Canada's government to incite violence by "Freedom Convoy" protesters opposing Covid-19 vaccine mandates. This is false; the owner of the company that leased the container said it had been there since before the protest to collect rubble from work on a nearby parking garage, and an AFP journalist confirmed that it has now been removed from the site.

"Canadian Government leaving dumpsters full of rocks in the streets in the hopes that the protests will turn violent," says the text above a photo of a large container full of rubble in the middle of a snowy street in a February 9, 2022 Facebook post. 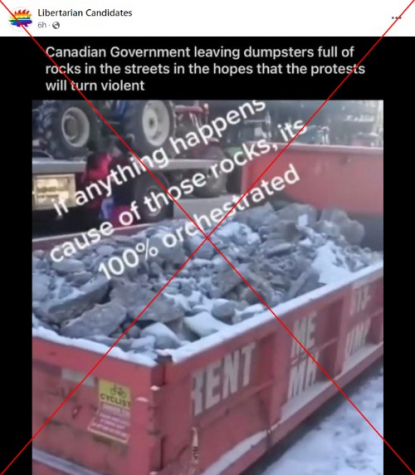 The photo is a screenshot of a video shared on Reddit, TikTok and Facebook, in which a man is seen walking on a street full of large rigs with people draped in Canadian and Quebec flags, and suggests that the dumpster was left by the government. "They think that we're going to be violent with that," he is heard saying.

A convoy from as far as the western Canadian province of British Columbia drove to Ottawa to protest a Covid-19 vaccine mandate for cross-border truckers that took effect on January 15 in Canada and on January 22 in the United States. The protests continued into early February, shutting down the central city and sparking similar anti-mandate demonstrations.

Hundreds of big-rig trucks were paralyzing the streets of downtown Ottawa, with the mayor calling the situation out of control and declaring a state of emergency. The protest became a rallying point for those opposed vaccine mandates and other restrictions aimed at curbing the spread of Covid-19 worldwide.

However, the company that leased the container dismissed the claim.

In the video footage, the company name, Mr Dumpster, is visible on the container. AFP contacted company owner Danny Benson on February 9, and he said in French: "The dumpster was never there for malicious ends or anything like that. If we had done that, we wouldn't have left our phone number and name on the dumpster."

Benson said that the dumpster had been on Albert Street, in downtown Ottawa. AFP confirmed the location using Google Street View and comparing it to visual elements in the video, including the Constitution Square building entrance. The intersection is just five blocks from the parliament building where the protesters gathered. 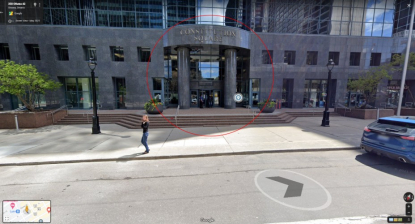 Screenshot of a Google Street View of Albert Street, visible in the video

Benson explained that dumpsters were leased to a contractor working at that site since the summer of 2020. "I don't know exactly what they're doing, but they're repairing the cement on the ramp of a garage under a building several stories high," he said.

He also said that he removed the dumpster on February 6 following a police request to the contractor and placed it in storage.

Ottawa police declined to comment on the topic, but an AFP reporter visited the site and confirmed that the dumpster was no longer there on February 10. 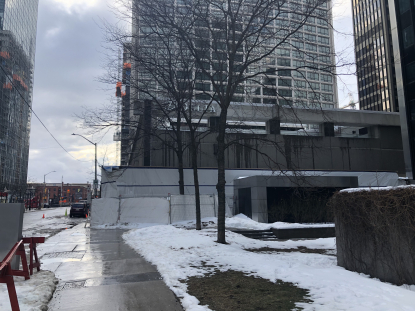 A photo taken on February 10, 2022 shows the site in downtown Ottawa, Canada where a dumpster full of construction debris was previously located ( AFP / Amel Semmache)

Benson's account of work on the parking garage (visible here) was confirmed by an employee of a nearby local business who asked not to be identified. He said the dumpster had been there for months, and that at least five such dumpsters had been filled with rubble in the process.

Benson also said that his company has been helping the convoy by providing them with a container for trash at a site east of downtown Ottawa hosting truckers who could not fit their rigs across from parliament.

These posts echo past false claims that suggested that the US government had left piles of bricks for protesters to throw in cities that were the site of demonstrations against racism and police violence in the summer of 2020.