Facebook users shared a photo of a crowd hundreds of thousands strong, alongside a claim it showed a 2022 anti-vaccine mandate protest in Ottawa, Canada. This is false; the photo was taken during an anti-government protest in Moscow in 1991.

"Ottawa, Canada," says the text above a photo shared on Facebook on January 31. The photo shows a crowd of hundreds of thousands of demonstrators gathered on a large city square on a foggy day. 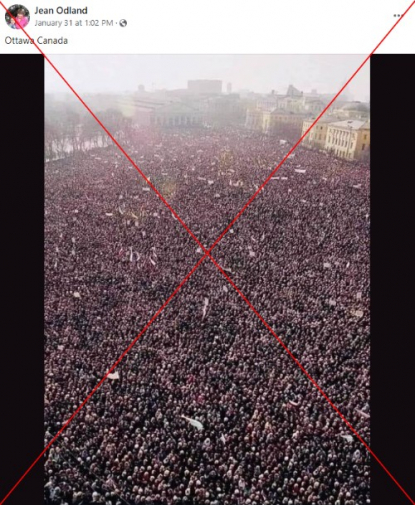 The timing of the post suggests that the photo depicts a rally that police estimated drew 15,000 protesters to the Canadian capital on January 29. Many of them remained in Ottawa on February 3 as the protest became a rallying point for those frustrated with ongoing federal and provincial efforts to mitigate the impact of Covid-19.

The demonstrators joined truckers from across the country, some who traveled in a convoy from as far as British Columbia, to protest a federal Covid-19 vaccine mandate for truck drivers crossing the US-Canada border.

The fog in the photo makes identifying the surrounding buildings harder, but Ottawa lacks such a large square, and this photo was not taken in Canada, AFP has found.

A reverse image search in Google shows that the image was taken in 1991 by photographer Dominique Mollard for the Associated Press. The image is still featured in the news agency's photo archives.

The caption says: "Hundreds of thousands of protesters pack Moscow's Manezh Square next to the Kremlin, Sunday, March 10, 1991, demanding the Soviet President Mikhail Gorbachev and his fellow Communists give up power. The crowd, estimated at 500,000 was the biggest anti-government demonstration in the 73 years since the Communists took power."

In November 2021, the same photo was used in social media posts that falsely claimed it showed an anti-vaccine mandate protest in Vienna, Austria.

AFP Fact Check has identified other posts falsely sharing images unrelated to the "Freedom Convoy 2022," and debunked the false claim that traffic cameras were disabled by the government to keep the public from seeing popular support for the movement.