Calls to ban the domestic pet ownership of pit bulls in South Africa have grown louder after a number of deadly attacks related to the breed. As a petition to ban the animals gathered pace, social media posts claim cash rewards are on offer for anyone reporting the owner of a pit bull. However, animal welfare activists, officials and a foundation supporting the ban have dismissed the claim as false.

“There’s a R2,500 reward in South Africa when you report a household that owns a Pitbull (sic),” reads a tweet from a Twitter account with more than 1.8 million followers and a history of spreading disinformation. AFP Fact Check has previously debunked false claims shared by the account such as here and here.

The purported reward ranges from $87 to $145. Other posts repeated the claim here and here, but made no mention of where to file a report, how the money would be paid or what regulation, if any, was being invoked. 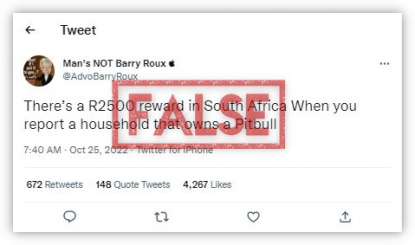 A petition was launched by the Sizwe Kupelo Foundation in October 2022 to ban the ownership of pit bulls as domestic animals because of the growing number of violent and fatal attacks after a family dog killed a 10-year-old in September 2022.

“It is time that the South African government takes decisive steps and impose a complete ban on the ownership of pit bulls as domestic animals,” the petition reads. “Such a move would prevent further attacks and unnecessary deaths. We cannot continue sending out messages of condolences for something that can easily be prevented.”

Kupelo is a former civil servant from the Eastern Cape who established a foundation to help uplift rural areas in the province.

Several people have been killed by pit bulls in South Africa this year, including a six-year-old girl mauled to death by a neighbour’s dog in May, and an eight-year-old boy who was killed in the Free State provincial capital of Bloemfontein by a pit bull that forced its way through a fence into the child’s garden.

Also in the Free State, two pit bulls mauled a three-year-old to death on November 20, 2022. According to a police statement, angry community members killed one of the dogs and set it alight.

Kupelo’s foundation distanced itself from the purported reward on October 27, 2022.

“We are calling on people not to be misled by the social media posts which say people who report homes with pit bulls will be paid between R1,500 and R2,500,” it said in a statement.

The National Council of Societies for the Prevention of Cruelty to Animals (NSPCA) said the false post put pit bulls and their owners at risk. It added called the post “highly questionable given that it is from an unverified account and contains no contact information”.

“It further contains no information as to why the pit bulls are being sought after to the point that a reward has been offered,” the NSPCA said in a statement on October 26, 2022.

The organisation also warned that individuals were trying to “impersonate SPCA personnel and demanding that people hand their pit bulls over to them”.

“This is also a scam. The SPCA is NOT going door-to-door and demanding that people hand over their pit bulls.”

Regulations governing the ownership of dogs in South Africa are usually specified in municipal bylaws, including the management of all dangerous and nuisance animals.

The PitBull Federation of South Africa believes that the spate of attacks could be managed by educating owners and implementing stronger government regulations.

It also asked pit bull owners to have more constructive discourse around the attacks and avoid blaming victims or owners: The NSPCA said 49 pit bulls had so far been handed over to their care by owners in Bloemfontein, in an interview with state broadcaster SABC on November 15, 2022.

As of November 17, 2022, the petition to ban the dogs had been signed by 96,000 people. A recent Facebook post by the foundation said they were waiting for a date when they could deliver the petition to the Department of Agriculture, Land Reform and Rural Development (DALRRD).

DALRRD also told AFP Fact Check it had no knowledge of the reward offers mentioned in the claims on social media.