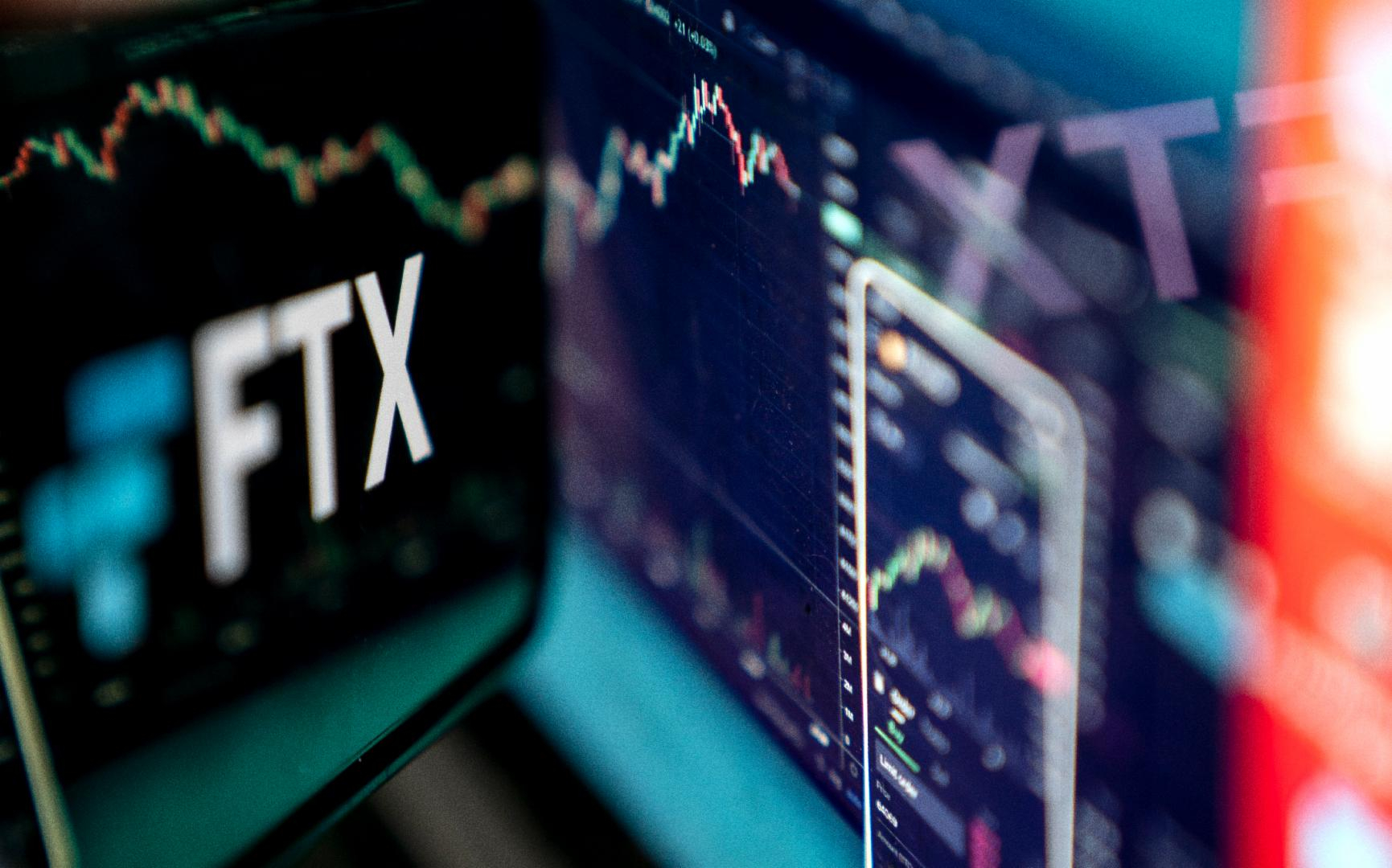 No evidence Ukraine aid 'laundered' to Democrats through FTX

An article shared thousands of times on social media claims FTX, a now-bankrupt cryptocurrency exchange, funneled US aid meant for Ukraine to Democratic candidates running in the midterm elections instead. This is unproven; public records show no evidence supporting the allegation, which Kyiv, the Pentagon, FTX partners and experts have said is inaccurate.

"We have information that the tens of billions of dollars going to Ukraine were actually laundered back to the US to corrupt Democrats and elites using FTX cryptocurrency. Now the money is gone and FTX is bankrupt," says an article published November 12, 2022 by the Gateway Pundit, a website that has previously promoted conspiracy theories and misinformation about elections.

The claim was shared thousands of times on Instagram, Facebook and Twitter after Americans went to the polls on November 8, according to CrowdTangle, a social media insights tool. 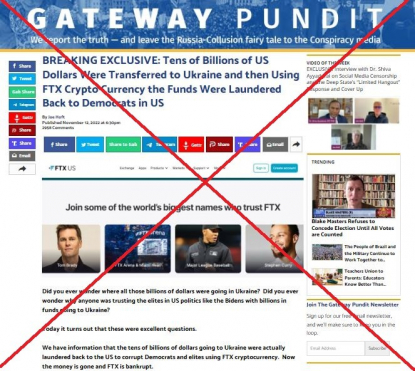 The articles -- which include no sources -- come after the spectacular collapse of FTX, one of the world's largest cryptocurrency exchanges. The company was headed by Sam Bankman-Fried, who has made donations to the Democratic Party, amounting to millions of dollars, but not billions.

The Gateway Pundit claimed a large portion of billions of dollars in US aid to Ukraine, which has been fighting a Russian invasion since February 2022, was somehow diverted through FTX to Democratic candidates. The article also suggested Aid for Ukraine, a cryptocurrency donation website set up as a partnership between FTX and Kyiv, was part of the scheme.

However, in a statement emailed to AFP, a Pentagon spokesperson said: "We have seen no evidence to corroborate these claims."

AFP examined the facts about US aid to Ukraine, cryptocurrency donations to the country's war effort and Bankman-Fried's contributions to Democratic groups during the midterm elections.

US aid to Ukraine

In May, US President Joe Biden signed a $40 billion aid package to help Ukraine and other countries affected by Russia's invasion. Since then, Biden has approved additional funding -- the bulk of which has consisted of military aid.

Not all of this was designated for Ukraine. The package included an array of programs, including funds to seize Russian yachts and other properties, and to strengthen US military operations in Europe, according to the legislation approved by Congress.

Mark Cancian, a senior fellow at the Center for Strategic and International Studies, estimated that, based on congressional reports, about $10 billion has been disbursed from the roughly $68 billion of aid that Congress has approved.

That money includes military equipment and supplies, humanitarian assistance and economic aid to the Ukraine government and US operations, Cancian said.

The US has committed more than $19.3 billion in security assistance to Ukraine since the start of the Biden administration, according to a November 10, 2022 press release from the Defense Department. An accompanying fact sheet details how that money has been spent.

The majority of the aid consists of military equipment and supplies, with some additional funding for "training, maintenance and sustainment."

For example, the fact sheet lists "over 1,600 Stinger anti-aircraft systems" and "over 8,500 Javelin anti-armor systems" as going to Ukraine. A similar document from the State Department offers more details on security assistance.

A September 2022 report from the Defense Department inspector general pointed to some shortcomings in financial reporting but identified no misuse of funds.

Meanwhile, a fact sheet from the US Agency for International Development (USAID) details an additional $8.5 billion in American financial aid to Ukraine this year, which has been used for "public services, including health care, education, and humanitarian assistance." These funds, delivered through the World Bank, are subject to third-party monitoring, according to USAID.

USAID's inspector general has an ongoing spending review in collaboration with the Departments of State and Defense.

"Most of the aid goes through third parties and not directly to the Ukrainian government. For example, much of the humanitarian assistance goes to relief organizations," Cancian told AFP. "Purchases of military supplies for Ukraine go to the contractor."

Cancian said it is theoretically possible that some of the money for Ukraine could have been diverted, but that he has "not heard any reports to that effect."

Aid for Ukraine is a fundraising site where people can donate to the country via cryptocurrency. It launched in March 2022 as a partnership between the Ministry of Digital Transformation, FTX and Everstake, a Ukraine-based company that provides technical blockchain support.

Aid for Ukraine said in a November 15 Twitter thread that the claim circulating online "does not correspond with reality."

6/11 This information does not correspond with reality, as Aid For Ukraine has used FTX only a few times exclusively to convert crypto donations into fiat in early March 2022. The National Bank of Ukraine has confirmed the receipt of all donations: https://t.co/Fhyq9BnBZw

"Aid For Ukraine has used FTX only a few times exclusively to convert crypto donations into fiat in early March 2022. The National Bank of Ukraine has confirmed the receipt of all donations," the website said, citing a March 11 tweet from the bank.

Aid for Ukraine added: "Out of $60 million received, $54 million has already been spent on Ukraine’s humanitarian and military needs," citing reports on its platform.

In a November 14 tweet, a Ukrainian government official also denied allegations that US aid was diverted through cryptocurrency to Democratic political campaigns.

"Ukraine's gov never invested any funds into FTX," said Alex Bornyakov, deputy minister of digital transformation, in the post. "The whole narrative that Ukraine allegedly invested in FTX, who donated money to Democrats is nonsense, frankly."

Michael Chobanian, head of Ukraine's blockchain association, also dismissed the allegations, tweeting November 13 that "no crypto was stored on the FTX."

There is a lot of conspiracy around Aid For Ukraine Fund and FTX. We used FTX in the first month of the war as an off ramp to fiat in cases when we need fiat. No crypto was stored on the FTX. You can double check in chainanalysis. Remember, not your keys, not your crypto ✌️

Bankman-Fried gave millions of dollars to political action committees (PACs) during the US midterm elections, according to public records collected by the website OpenSecrets.

Large amounts went to groups supporting Democrats, including the Protect Our Future and Opportunity for Tomorrow PACs. But he also donated to conservative organizations, including Heartland Resurgence and the Alabama Conservatives Fund.

Ryan Salame, co-CEO of FTX, was also a donor to Republican campaigns in the midterms, according to public records from the Federal Election Commission.

Both Bankman-Fried and Salame donated in a personal capacity -- not through FTX, according to the records.

Under US law, Bankman-Fried -- an American citizen living in the Bahamas -- is legally allowed to donate to candidates and PACs. Contributions from foreign nationals on behalf of another person or entity are barred, according to the FEC.

With FTX under investigation, lawmakers from both parties have symbolically given up campaign contributions from the exchange's top executives. AFP reached out to FTX for additional comment, without reply.

AFP has fact-checked other claims about Ukraine here and US politics here.

All articles
Ukraine-Russia conflict US POLITICS