Skip to main content
Chinese People's Liberation Army personnel participate in a military parade at Tiananmen Square in Beijing on October 1, 2019, to mark the 70th anniversary of the founding of the People's Republic of China (AFP / Greg Baker)

Articles and social media posts say 50,000 of Beijing’s soldiers were killed in a strike on a bunker in Maine -- part of a series of baseless claims about Chinese military action in North America. But local authorities said there was no evidence of either foreign troops or a deadly blast in the northeastern US state.

“Hal Turner: 50,000 Chinese Soldiers Were Bombed and Killed in Maine Which Was Listed as an Earthquake,” says the headline of a December 9, 2020 article shared on Facebook. 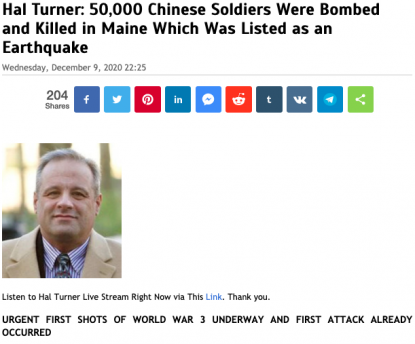 Screenshot of an article from Before It’s News, taken on December 16, 2020

Turner is an American talk radio host and blogger who was convicted in 2010 for threatening to assault three federal appeals court judges in Chicago, a crime that saw him barred from radio programming for three years.

The same claim can also be found in this article, and on Facebook here and here.

Some posts claim that an F-16 jet was shot down by Chinese troops in Michigan’s Upper Peninsula and that People’s Liberation Army battalions were trained in Canada’s British Columbia.

Some of these claims can be traced to the Hagmann Report, an independent podcast that says on its website that it “will never be encumbered by political correctness.” 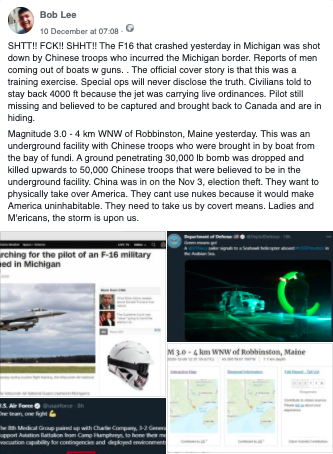 All the claims are false.

According to the United States Geological Survey (USGS), a magnitude 3.0 earthquake was recorded on December 9, 2020 near the Maine town of Robbinston, three miles (five kilometers) from Canada. But there is no evidence it was the result of a bomb.

“Washington County Maine has a population of a little over 30,000 people. It would be practically impossible for 50,000 troops to be in the Robbinston Maine area without being observed by someone,” he added.

A supervisor for the Sheriff’s Office in Washington County also said by phone that the claim was unfounded.

And Theresa Porter, city clerk in the nearby city of Calais said by phone that nothing unusual occurred on December 9.

“We’re very small. Obviously we would know if there were 50,000 Chinese people in the area,” Porter said.

Others posts shared a satellite image of the forested area where the earthquake hit, claiming that it appeared to have been cleared.

A search on Google Maps shows that the area in question is not a cleared forest but a marshy wetland surrounding the creek leading to Eastern Lake, which the Maine Department of Inland Fisheries defines as a pond.

On December 8, 2020, an F-16 plane belonging to the Wisconsin Air National Guard crashed during a routine training exercise over Michigan’s Hiawatha National Forest, across Lake Superior from Canada.

Capt. Durwood “Hawk” Jones, 37, of the 115th Fighter Wing was identified as the pilot who lost his life in the crash.

The cause of the crash was not immediately known and the 115th Fighter Wing declined to comment on the ongoing investigation, which is expected to take up to a year.

Getting investigators to the remote crash site can take up to a week, Commander Bart Van Roo said on December 11. No US military or media reports mention suspicion of Chinese involvement.

There is also no evidence that Chinese troops massing at the Canadian border.

In October 2020, Turner published another article claiming that China was amassing “tens-of-thousands” of troops in Canada. It said: “Canada and China signed a treaty that allows the People’s Liberation Army of China to station Chinese troops in Canada, beginning in 2020.”

Daniel Le Bouthillier, a spokesman for Canada’s Department of National Defense, said by email, “Not much to say except that it isn’t true.” 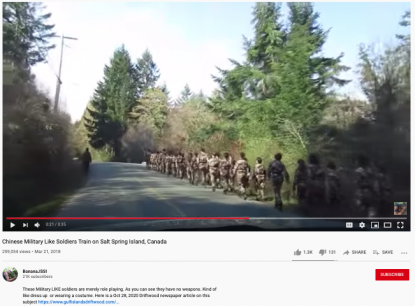 The video is not from 2020 and does not show a People’s Liberation Army (PLA) battalion training less than 100 miles from the US border.

“Banana” Joe Clemente, the Salt Spring resident confirmed via Facebook that he filmed the scene on March 17, 2018 and posted it on YouTube more than two years ago.

Clemente said the women in the video were staying at the Mineral Springs Resort, on the northern part of the island. The resort’s manager was not available for comment.

The issue was amplified after popular Fox News host Tucker Carlson discussed the topic with Ezra Levant, the editor-in-chief of the Rebel News website.

Amid ongoing disagreements between Canada and China after the 2018 arrest of Huawei executive Meng Wanzhou in Vancouver on behalf of the US, and the subsequent arrest of Canadians Michael Kovrig and Michael Spavor by Beijing, Canadian Armed Forces have been reviewing engagement with China.

“We do not train with the PLA,” Le Bouthillier said by email.

“Based on an agreement signed in 2013, there has been the occasional, reciprocal granting of observer-status for non-sensitive activities, including winter survival exercises. A Canadian Army delegation visited China in January 2018, while a PLA delegation visited Canada in February of that same year,” Le Bouthillier said.

#FactFriday - The #Army deployed a team of four observers from the Canadian Army Advanced Warfare Centre to China. The Chinese PLA accepted a reciprocal invitation from the CA to observe winter survival training in Petawawa. #StrongSecureEngaged #StrongProudReady pic.twitter.com/eARdeIXggz