Biden did not talk to 'inanimate objects' at Pittsburgh rally

A video viewed thousands of times on Twitter is claimed to show a "lost" Joe Biden waving at the "void" and talking to "inanimate objects" at a rally ahead of the US midterm elections. This is false; other footage from the event shows the president saluting a small group of construction workers behind him during his speech.

"US President Joe Biden has again demonstrated the ability to hear voices and communicate with inanimate objects. This time, in Pittsburgh, a mobile grandfather decided to talk to a construction crane in front of the whole country," says an October 21, 2022 tweet.

The post includes a video that shows Biden finishing a speech and turning his back to the crowd while seemingly gesturing at the air. Then he leaves the stage and walks down a small flight of stairs. 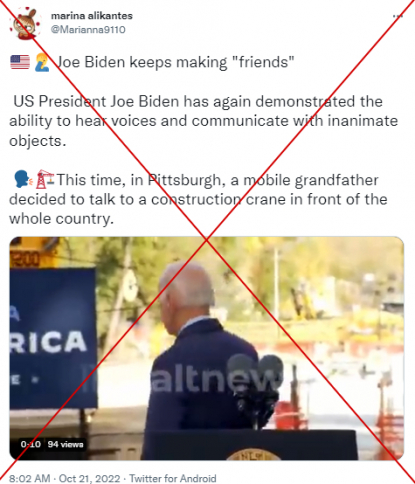 Another tweet posted on October 20 and sharing the footage, viewed more than 26,000 times, says: "Biden is talking to the void again and can't find a way off the stage."

The same claim circulated online in Spanish, French and Arabic. But it is false.

The video in the posts shows a portion of a speech Biden gave in Pittsburgh, Pennsylvania during an October 20, 2022 rally in support of John Fetterman, a Democrat running for US Senate. The event was held at the site of Fern Hollow Bridge, which collapsed in late January.

Local construction workers attended the rally, during which Biden mentioned the Infrastructure Investment and Jobs Act, which passed in November 2021. C-SPAN footage shows Biden finishing his speech and thanking the workers behind him.

A video from a different camera angle -- also seen in an AFP photo below -- shows the group standing next to a construction crane behind the stage as Biden leaves. 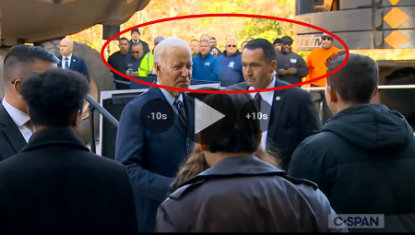 Today, I'm in Pittsburgh with @POTUS at the site of January's Fern Hollow Bridge collapse.

It was a terrifying reminder of our aging infrastructure and the critical need to repair it. 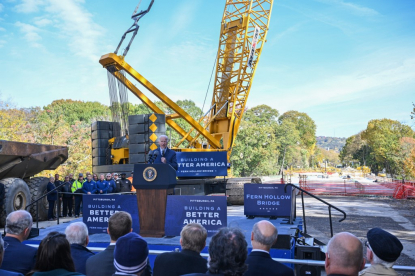 US President Joe Biden speaks about the rebuilding the nation's infrastructure at the Fern Hallow Bridge in Pittsburgh, Pennsylvania, on October 20, 2022 ( AFP / Mandel Ngan)

Different camera angles show Biden entering the stage on one side and exiting on the other. In a clip from The Independent, the president shakes hands with the same group of workers he faced at the end of his speech.

Biden is regularly the subject of altered and misrepresented videos that attempt to show poor physical or mental health. AFP has fact-checked such posts here, here and here.