Skip to main content
US President Joe Biden prepares to sign a series of orders in the Oval Office of the White House in Washington, DC on January 20, 2021. (AFP / Jim Watson)

An image purporting to show US President Joe Biden sleeping at his desk in the White House’s Oval Office has been shared on Facebook and Twitter. The image, however, has been manipulated; a photo of Biden appearing to fall asleep during a budget speech in 2011 has been digitally inserted onto a photo of him signing executive orders on January 20, 2021.

The image was published on Facebook here on January 28, 2021.

“AMERICA IN DECLINE,” a text caption on the picture reads. “This decrepit old grifter works MAYBE five hours a day. We traded in a work horse, for someone that belonged out to pasture or sent to the glue factory a long time ago. Nothing says we threw in the towel better than this nauseating image, the 'commander in chief' can't even stay awake.” 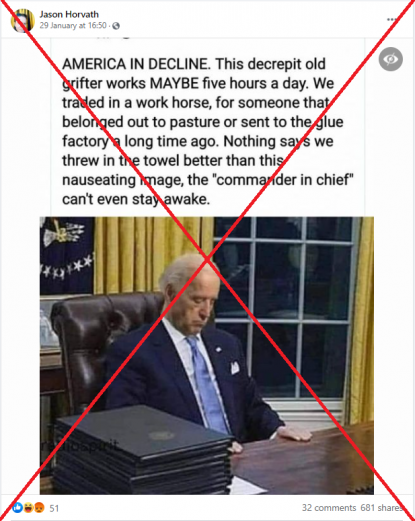 The image has also been shared on social media around the world, including in the US and Australia.

The post circulated a week after Biden took office at the age of 78, making him the oldest US president in history. Ahead of the November 2020 election, Biden was also regularly targeted by critics who claimed he was too old or senile to serve as president.

A Google reverse image search found this photo published by the Associated Press news agency on January 20, 2021. It shows Biden awake and seated in the same postion as seen in the doctored image.

The AP’s photo caption reads: “President Joe Biden pauses as he signs his first executive orders in the Oval Office of the White House on Wednesday, Jan. 20, 2021, in Washington”.

Below is a screenshot comparison of the AP's photo of Biden (L) and the image in the misleading Facebook post (R):

Biden's signing of executive orders on January 20, 2021, was also reported on by AFP here.

A keyword search found that the facial image of Biden inserted into the doctored image appears to have been taken from footage of him seemingly sleeping during a budget speech by former US President Barack Obama on April 13, 2011. The video was published by US network CBS News here.

The CBS video is titled: "Obama puts Biden to sleep with budget speech?"

Below is a comparison of a screenshot of Biden in the CBS News video at 0:33 (L) and the image in the misleading Facebook post (R):