Zimbabweans have been the target of malicious claims on social media amid a climate of hostility in South Africa towards foreigners. Images have recently circulated with claims that a family in South Africa died after taking lethal tablets sold to them as a mosquito repellant by Zimbabweans. This is false; there is no link between the images of the pills and of the people on the floor, who were tear-gassed in Chad. South African police also denied the claim.

One of the Facebook posts published in isiXhosa on October 14, 2022, asks if it is true that Zimbabweans are selling mosquito tablets that have killed people, particularly in South Africa’s Western Cape province.

“These people want us dead,” reads part of the post, which features a close-up image of grey pills and another picture of three people appearing lifeless on the floor. 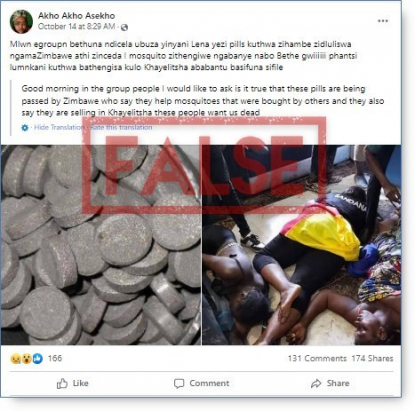 Another post from Nigeria includes more images of people lying on the same floor and claims the pills are a “mosquito coil” which is deadly when inhaled. “The new trend of reducing our population,” reads part of the post’s caption.

While the grey pills seen in the posts are potentially fatal if ingested, they have no link to the people on the floor in the adjacent images.

A reverse image search led to a French debunk published on September 23, 2022, which investigated a voice note circulating in Chad where it was falsely claimed the images showed people killed by a toxic mosquito repellent in Attécoubé, Ivory Coast.

It transpired the pictures showed supporters of Chadian opposition politician Succès Masra who were tear gassed on September 9, 2022, when their leader was on his way to court. Incidentally, one of the victims is wearing a shirt that reads “Sandana”, which is a city in Chad.

Masra posted more than 20 pictures and videos to Facebook in the aftermath of the unrest. Some of these images were used in the false posts.

French media (here and here) reported that police had violently dispersed hundreds of his supporters with live ammunition and tear gas outside the party’s headquarters. No deaths were reported.

An AFP journalist who was on the scene and witnessed the events told AFP Fact Check that while he believes people lost consciousness after the tear gas was fired, to his knowledge nobody died.

Videos posted by Masra two days later (here and here) show some of the same victims falsely claimed to have died moving around and receiving treatment.

Available news reports made no claims about deaths, however attempts to confirm this with Masra were unsuccessful.

Meanwhile, police in South Africa denied the claims being made on social media. In a statement dated October 14, 2022, they confirmed having “no record of these fatalities and wish to dispel this as fake news which cannot be substantiated”.

Another reverse image search of the grey pills revealed they are aluminium phosphide, mainly used as a fumigant for pest control. 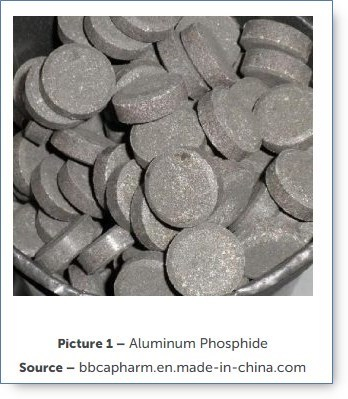 A screenshot of the tablets, taken from a chemistry learning website Chemistry Learner

The same image of the tablets has been used on a number of websites that market similar industrial products.

The compound is highly toxic to humans and if ingested can lead to death.

A screenshot describing how aluminium and magnesium phosphide are used, taken from the U.S. Environmental Protection Agency

On October 20, 2022, deadly clashes between police and demonstrators protesting against the military’s grip on power in Chad claimed at least 50 lives, including members of the security forces.

The UN condemned the use of lethal force against the protesters and demanded an investigation.

Hundreds of demonstrators took to the capital and other regions to mark the date when the military had initially promised to hand over power.

The nation has been in crisis since April 2021 after the death of President Idriss Deby, who authoritatively ruled for three decades.

His son, Mahamat Idriss Deby, seized power immediately after and had promised an 18-month transition to elections, but on October 1, 2022, he announced the polls would be pushed back by two years.