Thousands of Facebook users have shared a map of historic heat records across the United States, suggesting it is evidence against human-driven global warming since many of the records date to the 1930s or earlier. The claim lacks context; the map shows individual records up to 2019, but broader temperature data show a warming trend since the 19th century, in line with a consensus among world scientists.

"Only two states have had a record temperature in the last 20 years," claims a Facebook post on August 8, as parts of the United States suffered a drought. "By far most records were set in the 30s, when there were very few cars and planes, but yeah all of a sudden, 'quit using fossil fuels and pay more taxes or we're all gonna die.'"

The post included a map from the National Oceanic and Atmospheric Administration (NOAA) showing each state's top temperature record. The earliest dated from the year 1898 in Oregon; the most recent to 2012 in South Carolina. As the post, and others on Facebook and on Twitter noted, many of the records dated to the 1930s. 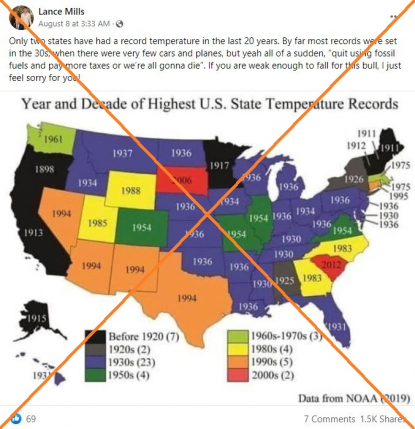 However, NOAA said that those records do not disprove the impact of human-caused climate change on heat in the United States.

"The Facebook post conflates weather and climate. Climate change is measured over decades and centuries and over larger spatial scales than the state level," a spokesman for NOAA's National Centers for Environmental Information told AFP in an email on August 24.

"Some of these state-level record extremes were set during very specific and unique weather events. Looking at the national and global scale, global temperatures continue to warm."

Thirteen of the records on the map dated from 1936, when a fierce heatwave struck the country. NOAA said that in that period, "the heat was accentuated due to a prolonged drought that was affecting the region, and poor farming methods which left little vegetation to help mitigate the hot temperatures."

NOAA provided an updated list of state temperature records, which can be seen here. Since the map in the posts was produced, four more records have been set: in Colorado in 2019 and in Oregon, Utah and Washington state, all in 2021. The highest US temperature ever recorded was in California in July 1913: 134 degrees Fahrenheit (56.7 degrees Celsius).

NOAA reported on August 8 that this year saw the third-hottest July on record in the United States - after July 1936 and July 2012. The records go back 128 years. It said the average temperature in the contiguous United States (excluding Alaska and Hawaii) was 2.8F or 1.6C higher than average at 76.4F (24.7C).

It said the heat was accompanied by "historic flooding and intensifying drought" in different parts of the country.

NOAA has published detailed information about how temperatures have risen since the 1880s here. It said last year that July 2021 was Earth's hottest month on record. The bars on this graph show the heating trend: 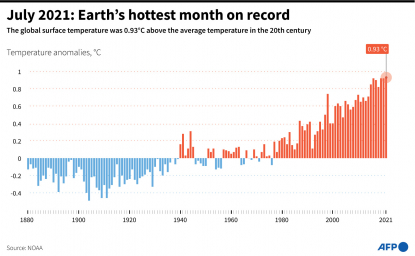 The Intergovernmental Panel on Climate Change publishes detailed reports on the state of scientific knowledge about climate change by hundreds of scientists in dozens of countries. A summary of the findings in its latest report is here.

US President Joe Biden on August 16 signed into law a big spending bill, allocating $370 billion to green energy initiatives aimed at limiting climate change. The cost will be covered in large part by closing tax loopholes and enforcing a new 15 percent minimum tax on corporations.

More of AFP Fact Check's reporting on inaccurate claims about climate change can be found here.