Video shows interior of Sufi leader’s mausoleum, not inside the Kaaba

The Kaaba, a large black cubic structure located at the centre of Mecca’s Grand Mosque, is Islam’s holiest site; its doors are only opened for washing or for visiting Muslim VIPs. A Facebook post recently circulating in Nigeria claims to show the interior of the structure, with sparkling chandeliers. However, the claim is false: the video was filmed in Iraq and shows the inside of a Sufi scholar’s mausoleum. Genuine footage from inside the Kaaba shows that it looks very different. 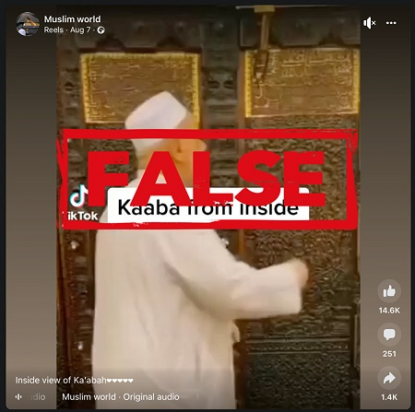 The video shows a man dressed in a white kaftan and cap opening the doors to a building. Inside, the walls are decorated with Arabic calligraphy while chandeliers hang from the ceiling. The video also shows two other doors that lead to inner rooms.

The Nigerian account that posted the video has 38,000 followers and shares pictures, videos and memes about Islam.

About 50 percent of Nigeria’s population is Muslim. The country has the fifth largest Muslim population in the world and is projected to become the third highest by 2060.

But the claim that the video shows the Kaaba’s interior is false.

Using the InVID-WeVerify video verification tool, AFP Fact Check conducted reverse image searches on keyframes from the footage and found that the same video was posted by a TikTok account called “fadar_bege” months earlier, on April 14, 2022, without any reference to the Kaaba.

At 0’29, we noticed Arabic calligraphy on the wall. It translates to “Abdul Qadir the famous is my name”.

Abdul Qadir Al-Gilani was an influential Islamic scholar who founded the Qadiriyah order of the Sufi branch of Islam. He died in 1166 and was buried in Baghdad, the capital city of Iraq.

A keyword search for “Abdul Qadir al-Gilani” led to a video report posted to YouTube on March 16, 2021, showing the same interior. The caption and the narrator explain that it shows Al-Gilani’s mausoleum — not the Kaaba. 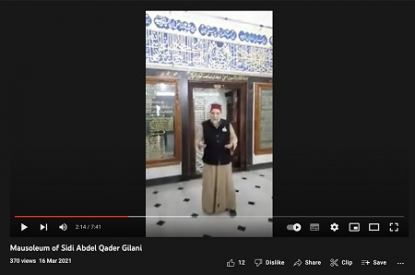 A screenshot of another video showing the interior of the mausoleum, taken on August 20, 2022

Other videos of the Sufi scholar’s mausoleum, like this one published on YouTube in June 2021, show the same interior.

The Kaaba and Al-Gilani’s mausoleum do not have the same significance in Islam. The Kaaba is referred to in the Koran and is important in accomplishing two pillars of Islam — daily prayer and the holy pilgrimage to Mecca.

Al-Gilani’s mausoleum does not have any such overarching importance in the religion. It is, however, visited all year round by Muslims who follow his teachings.

Videos of the Kaaba’s actual interior show that it looks very different from the Sufi scholar’s mausoleum.

One of these videos, posted on Twitter by the Saudi government-owned Saudi Press Agency on August 16, 2022, shows the Crown Prince of Saudi Arabia Mohammed bin Salman Al Saud leading the annual washing of the Kaaba.

On behalf of the Custodian of Two Holy Mosques, HRH the Crown Prince was Honored to Wash the Holy Kaaba#SPAGOVpic.twitter.com/PJgM9rjb0U

Dubai-based media outlet The National also reported on the annual ritual and published another video of the event.

The videos show that the Kaaba has a smaller interior than the mausoleum, with three brown pillars erected at the centre of the room.

The Kaaba is about 15 metres high and has a base of 10 by 12 metres. It is covered by kiswah, a black brocade, with the Muslim profession of faith (Shahadah) and Koranic verses embroidered on it in gold.

The section of the kiswah that covers the door is embroidered in a vertical rectangle that can be rolled up when necessary. The door itself is above ground level and has removable wooden stairs that aid entry. 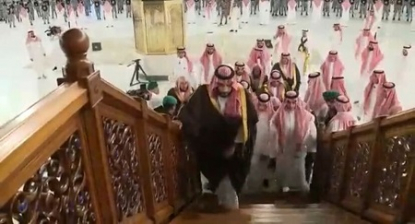 A screenshot of a video posted by the Saudi Press Agency shows the wooden stairs at the entrance of Kaaba, taken August 23, 2022

The video of the mausoleum used in the false claim does not show these elements. Moreover, the colours and calligraphy etched on the doors of the Kaaba and the one in the video are different. 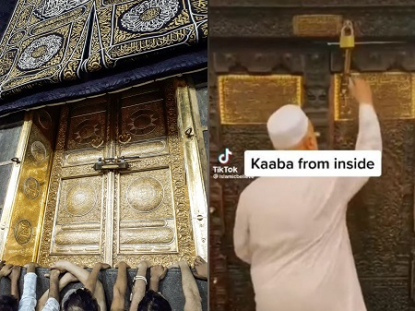 Moreover, the video published by the Saudi Press Agency showed that the Kaaba has only two golden doors — one at the entrance, and a second door inside that leads to the roof.

A longer version of the video in the false claim, published by a YouTube channel dedicated to Al-Gilani, shows there are three brown doors in the mausoleum. 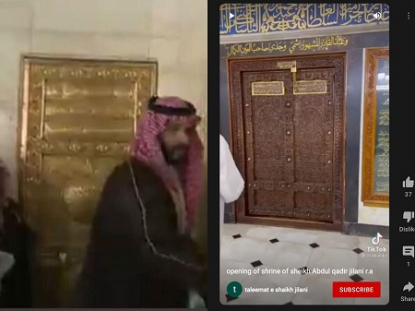 While big chandeliers hang from the ceiling in the mausoleum video, more discreet oil lamps and vessels decorate the Kaaba’s ceiling.