A video has been viewed tens of thousands of times in social media posts that claim it shows Jakarta Governor Anies Baswedan leading a major flag-raising ceremony at the National Monument in the Indonesian capital Jakarta to mark Independence Day. Some social media users praised Anies, expressing hope that he would one day replace President Joko Widodo as leader of the Southeast Asian country. Although Anies did lead a smaller flag-raising event in August 2022, the posts shared footage of a ceremony held in December 2014 -- years before he became governor.

Indonesia marked its 77th Independence Day, on August 17, 2022, holding full-scale celebrations across the country for the first time since the pandemic began in 2020.

The one-minute 42-second video featuring Anies was posted on the same day on TikTok here, where it has been viewed more than 32,800 times.

The video below the news headline shows a group of people raising a giant Indonesian flag attached to the National Monument in Jakarta, with superimposed text about Independence Day. 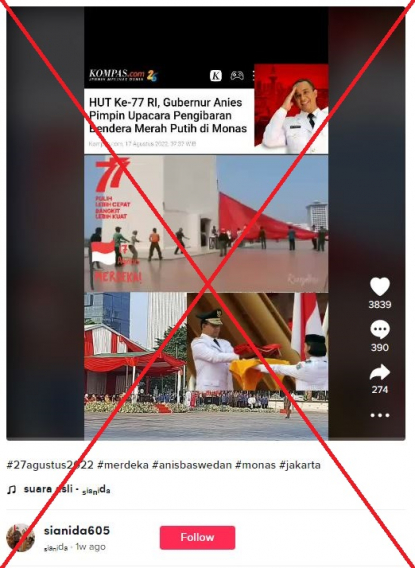 There are two pictures below the flag-raising clip: a photo of what appears to be an Independence Day ceremony, and an image of Anies presenting an Indonesian flag to a member of the flag-raising team.

The posts attracted praise for Anies, whose term will end in October 2022.

Some commenters expressed hope that he would replace President Joko Widodo as leader after the latter leaves office in 2024.

One user wrote:  "Cool, Mr. Anies. I hope you will become an Indonesian president in the future. Amen."

Another commented: "God, the feeling of happiness has touched the souls of Indonesian people who love their country. Hopefully, Mr. Anies can become this country’s leader."

But the footage has been shared in a false context.

A reverse image search on Google found the footage has combined three videos of a flag-raising event in 2014.

The first two clips were posted on YouTube here and here on December 8, 2014.

Both videos are titled: "Rehearsal for the giant RED AND WHITE flag hoisting at the National Monument, #StateDefenseDay December 19, 2014".

The third video -- posted here on the Facebook page of the Indonesian World Record Museum (MURI) on August 17, 2017 -- is said to show the flag-hoisting ceremony for State Defense Day on December 19, 2014.

Indonesia observes State Defense Day on December 19 every year to commemorate the establishment of an emergency government in response to Dutch colonial military aggression in 1948.

Below are screenshots comparing the video in the misleading post (left) with the genuine 2014 video (top right and centre right) and the MURI video (bottom right): 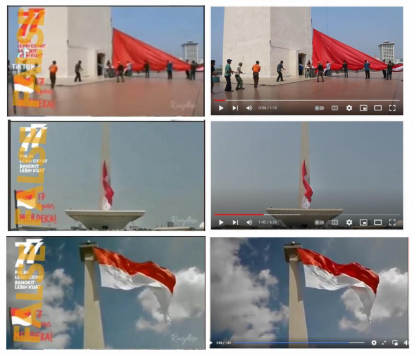 The flag-raising event at the National Monument Square to commemorate the 2014 State Defense Day was widely covered by Indonesian media, including Liputan 6, Kompas TV and Merdeka.

It was attended by Anies' predecessor -- then Jakarta governor Basuki Tjahaja Purnama -- and several Indonesian cabinet ministers, as reported here and here.

Anies was sworn in as Jakarta governor in October 2017 after winning divisive elections that were influenced by racial and religious sentiments.

The picture of Anies presenting a flag was taken from a photo gallery published by Indonesian news outlet Detik.com on August 17, 2019.

Reclamation Island D is located around 20 km (12.4 miles) northeast of the National Monument.

The Kompas.com headline and the picture of the Independence Day ceremony were taken from this Kompas.com news report published on August 17, 2022.

Below are screenshots comparing the clip in the misleading post (centre) with the genuine 2014 video (top right) and the Kompas.com article (left) and the Detik.com article (bottom right): 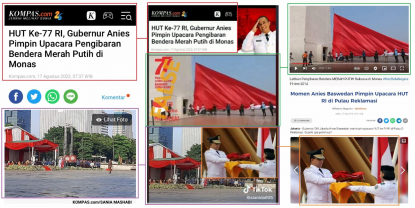 Screenshots comparing the clip in the misleading post (centre) with the genuine 2014 video (top right) and the Kompas.com article (left) and the Detik.com article (bottom right)

According to the report, Anies led the flag-raising ceremony at the Southern Plaza area of the National Monument on that day.

Footage from state-run Antara news agency and photos from the Jakarta provincial government show the Indonesian flag was raised on a regular flag pole, not the National Monument.

AFP has debunked various false and misleading claims about the governor here, here, here and here.