A graphic video has been viewed tens of thousands of times in posts that claim it shows a man shot by the Indian military in India's part of the disputed Kashmir region. However, the claim is false. The footage shows a coca farmer who was injured while handling dynamite at a protest in the Bolivian capital La Paz in August 2022.

"In Jammu and Kashmir, a stone pelter hurled a stone at an army man, and the army man replied to the stone with a bullet," reads a Hindi-language Facebook post shared on August 18.

The footage shows a man throwing a projectile in the street. Seconds later, an explosion erupts in front of him and he falls to the ground. Indian Prime Minister Narendra Modi's Hindu nationalist government has struggled to quell a decades-old insurgency and strengthen its hold over the Muslim-majority region of Kashmir, where a large number of people do not want to be part of India.

Half a million soldiers are stationed in the portion ruled by India -- the rest is controlled by Pakistan -- and a 2019 security crackdown has seen unprecedented restrictions on protest and press freedoms.

A reverse image search and keyword searches found the footage in a report by Bolivian TV channel Unitel about a coca producer who was "seriously injured" by dynamite at a protest.

The video circulating on social media (below left) is identical to the footage in Unitel's report (below right). 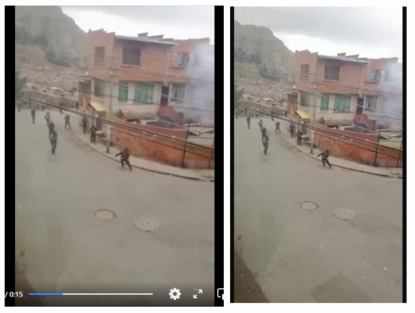 According to Bolivian news agency Agencia Noticias Fides (ANF), 30-year-old Placido Cota lost his left arm after handling dynamite during clashes with police at the march on August 8 in the Bolivian capital La Paz.

Bolivian coca farmers have staged protests in La Paz in a long-running dispute over control of the coveted commercialisation of the plant.

Growers from the Association of Coca Producers (Adepcoca) are demanding the closure of a parallel market for the plant, which they say is illegal and enjoys government support.

ANF reported that the protest in which Cota lost his arm happened in the capital's Villa El Carmen neighbourhood, where coca growers marched from 10th Street (Calle 10) to 1st Street (Calle 1).

The street seen in the video (below left) corresponds to Google Street View images of 2nd Street (Calle 2) in Villa El Carmen (below right). 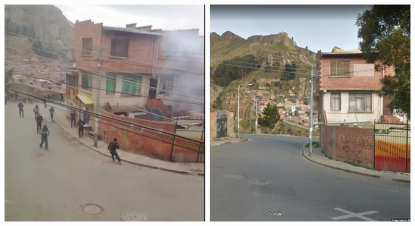 Arco Iris Hospital in La Paz released a video on August 19, showing Cota speaking from his hospital bed to thank his family and medical staff.

"God exists," he said. "Thanks to the hospital, I am alive."