A photo has been shared in multiple Facebook posts that claim it shows Indonesian President Joko Widodo, popularly known as Jokowi, congratulating Jakarta Governor Anies Baswedan for receiving an "international hero" award. The claim is false: the photo actually shows an event in 2018 during which Jokowi gave  Anies’ grandfather — the late Muslim intellectual AR Baswedan — a "national hero" title. 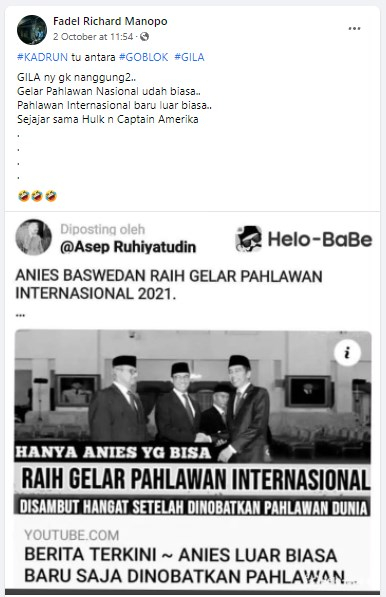 The post’s Indonesian-language caption translates to English as: "The CRAZIEST. Receiving the National Hero title is common. What is extraordionary is receiving the title 'International Hero'. It puts the person in the same league as the Hulk and Captain America."

The photo also appeared on other Facebook posts, including here, here, here and here, alongside a similar claim.

The posts, however, are false.

A Google reverse image search found the photo was published by CNN Indonesia on in an article on November 8, 2018.

The article’s first paragraph reads: "Indonesian President Joko Widodo (Jokowi) has given national hero title to six historical figures. One of them is Abdurrahman Baswedan (AR Baswedan), the late grandfather of Jakarta Governor Anies Baswedan,  who became one of the National Heroes."

Below is a screenshot comparison of the image in the misleading post (L) and the CNN Indonesia photo (R):

The award ceremony was also reported by other media outlets, like here, here dan here.

Separately in 2021, Anies was named a "2021 transportation hero" by the Transformative Urban Mobility Initiative (TUMI), a German-backed initiative focused on the endorsement of sustainable urban transportation.

The Jakarta Post reported the news here on February 26, 2021.