This video shows Jakarta governor falling off a motorbike in 2018

A video has been viewed thousands of times in Facebook and Twitter posts that claim that it shows Jakarta Governor Anies Baswedan falling from a motorbike in the Indonesian capital in 2021. The claim is false; the video shows Anies losing his balance while riding a motorbike in 2018.

The 14-second clip shows Jakarta Governor Anies Baswedan slowing down on a motorbike as he approaches a crowd of people, before he stumbles and falls off. 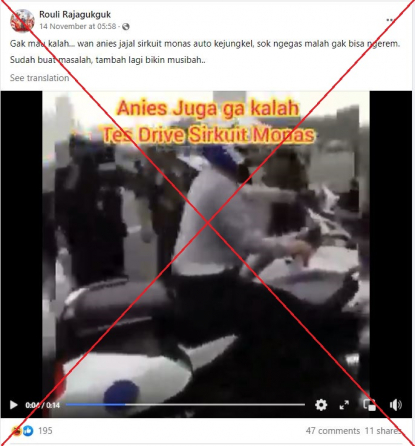 The Indonesian-language caption reads in part: "Don't want to lose out... Anies tried out the National Monument circuit and fell, hit the gas but couldn't hit the brake".

The Jakarta provincial government was forced to ditch plans to use the National Monument as a circuit for Formula E championship in June 2022 after it failed to gain approval from central government.

A reverse image search and keyword searches found the video was posted on YouTube here by media outlet CNN Indonesia on August 9, 2018.

The video report is titled: "This is the moment when Anies Baswedan fell from big bike".

The video's caption reads: "Anies Baswedan fell while trying a new motorbike for Jakarta officers. This occurred when Governor Anies Baswedan led the Jakarta Transportation Agency's readiness meeting for the 2018 Asian Games. On the sidelines of the event, Anies Baswedan had time to try out three high-cc motorcycles, which will be used by the agency's officers, at the National Monument compound, Central Jakarta."

The part seen in the misleading video starts from the 0:47 mark of CNN Indonesia's footage.

Below are screenshot comparisons between the clip in the misleading post (left) and the CNN Indonesia footage (right): 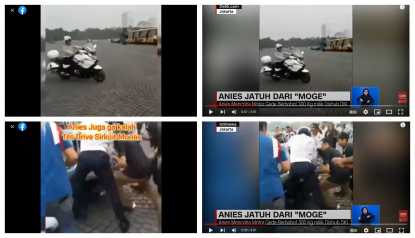 The incident was reported by local media, such as Detik.com and Liputan 6, in August 2018.

"The photo just before stopping and the bike tilted and then fell, ...usually I ride a Vespa. :) If the Vespa stops, one foot is enough to hold it, it seems that a motorcycle of this size needs both feet to hold it the same time when it stops. Had a new experience," he wrote.