Skip to main content
A traffic enforcer (R) guides commuters jostling with each other to ride on a passenger jeepney as a transport strike starts in Manila on September 30, 2019. ( AFP / JAM STA ROSA)

Facebook users in the Philippines have repeatedly shared the misleading claim that a government agency managing road traffic in the country's capital region announced cameras will fully replace traffic enforcers from November 2022. The Metropolitan Manila Development Authority, however, said the claim is "fake". A representative for the agency told AFP road cameras only augment the presence of its officers in monitoring traffic violations.

The misleading announcement was shared on Facebook on August 24.

"This means that no MMDA traffic enforcer will flag down any driver for any traffic violation on the road but instead, will monitor violations on screen via the CCTV camera.

"Consequently, car registered owners will be informed of violations via post mail and shall be given only 5 days to contest the violations." 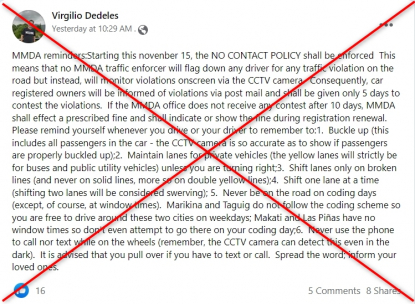 The Metropolitan Manila Development Authority (MMDA) manages transport policy across the capital region alongside the region's 16 cities and one municipality.

Its "No Contact Apprehension Policy" is a programme that uses cameras installed throughout the region to spot traffic violations.

The programme was first implemented more than a decade ago and was revived in 2016.

The post circulated after local media reported that transport groups had asked the Supreme Court to stop similar "no contact" policies by several cities in the capital.

On August 30, the court issued a temporary restraining order to halt these policies and is set to hear arguments in January 2023.

Claims that MMDA would only rely on road cameras starting from November were also shared on Facebook here, here and here.

"Thank you for this information", wrote one.

"I hope they fix the timers for the traffic lights first before they enforce this", said another.

But the MMDA said the posts share "wrong information".

"MMDA's traffic enforcers will continue to give citations to motorists who will violate traffic rules."

The statement includes a screenshot of a similar post making the misleading claim that had been stamped: "Fake! Not from MMDA".

According to the agency's website, the programme will not rid roads of traffic enforcers.

"It was conceptualised to supplement the presence of MMDA traffic enforcers," the website states.

"Aside from the fact that there are still places not covered by CCTVs, the No Contact Traffic Apprehension was designed to catch moving violations, thus leaving the apprehension of administrative offences to MMDA constables."

A representative from MMDA told AFP that "there are violations which can only be verified through physical apprehension".

"These administrative offences include driving without a licence or driving an unregistered public vehicle", the representative added.

The agency's explanation about the policy also states that individuals who receive a 'notice of violation' can protest their citation within seven days -- not five days as stated in the posts.

Further keyword searches show the misleading announcement has been circulating online since at least 2018.