Skip to main content
Activists gather to rally in support of canceling student debt, in front of the White House in Washington, DC on August 25, 2022 ( AFP / Stefani Reynolds)

Posts mislead on tax burden of US student loan forgiveness

Social media posts claim Americans must pay taxes on student loans forgiven by the Biden administration. This is partly false; the White House and independent experts say a 2021 law specifically exempts such debt relief from federal taxation, although some states may enforce different policies.

"All those college kids that got their student loans forgiven better look at this... The forgiven amount is still taxable and must be reported to the IRS as income," says a Facebook post from August 25, 2022. "If they think the interest rates are bad with their school loans, wait until they see the IRS interest rates."

Other Facebook users have made similar claims and linked federal debt relief to a plan to boost staffing for the Internal Revenue Service (IRS), which has previously been the subject of online misinformation. 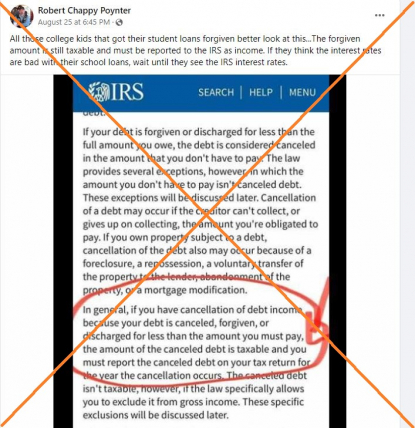 On August 24, US President Joe Biden announced that student loan holders earning less than $125,000 annually would receive up to $10,000 in debt forgiveness. Pell Grant recipients will get up to $20,000 under the plan, which will also extend the pause on student loan payments through December 31, 2022.

The plan has drawn strong reactions across America's political divide, with some heralding the move as a game-changer for debt holders while others criticize it as unfair to taxpayers and those who have already paid off their loans.

But debt forgiven under Biden's order will not be subject to federal taxation, the White House said in a August 24 fact sheet. The US Treasury Department confirmed that to AFP.

"Student debt relief will not be treated as taxable federal income," a spokesperson said in an email. "This is consistent with the policy of debt relief that was set by the American Rescue Plan."

According to the 2021 law, with some exceptions, a taxpayer's gross income "does not include any amount" related to the discharge of "any loan provided expressly for postsecondary educational expenses" between 2021 and 2025.

Jared Walczak of the nonprofit Tax Foundation highlighted this exemption in a August 25, 2022 blog post. However, he noted that some states might treat canceled debt differently than the federal government.

"Preliminarily, it appears that 13 states have the potential to tax discharged student loan debt, though the final count could be significantly smaller if states make legislative changes or administratively determine that the debt forgiveness can be excluded," Walczak said.

Those states include Hawaii, Idaho, Kentucky, Massachusetts, Minnesota, Mississippi, New York, Pennsylvania, South Carolina, Virginia, West Virginia and Wisconsin. They could impose a maximum tax liability ranging from $307 to $1,100, depending on income, according to the Tax Foundation's analysis.

John Buhl of the Urban-Brookings Tax Policy Center has offered a similar explanation, saying in a blog post following Biden's announcement: "For many, the change will be even more generous because last year’s American Rescue Plan Act (ARPA) makes the loan forgiveness tax free."

Buhl noted, however, that several states "do not automatically conform to changes in the federal definition of tax income, so unless they have explicit rules in place or take further legislative action, some beneficiaries could end up owing state tax on the forgiven portion of their loans."