Skip to main content
An activist holds a sign thanking US President Joe Biden for canceling student debt, during a rally in front of the White House in Washington, DC on August 25, 2022 ( AFP / Stefani Reynolds)

Republican lawmakers and conservative pundits who criticized US President Joe Biden's move to cancel up to $10,000 in student loan debt for lower- and middle-income Americans have been called hypocritical in social media posts showing they accepted pandemic-era loans that were later forgiven by the government. But the claim that commentator Ben Shapiro received a Paycheck Protection Program (PPP) loan is false; the aid cited in the posts went to a Los Angeles-based real estate broker with the same name.

"This you?" says an August 23, 2022 tweet published in response to Shapiro's criticism of Biden's plan.

The tweet includes a screenshot that appears to show someone named Ben Shapiro in Los Angeles received a $20,832 PPP loan that was later forgiven. 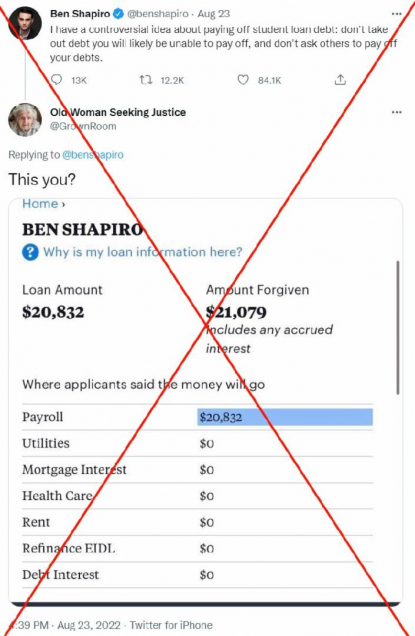 On August 24, Biden announced that student loan holders earning less than $125,000 annually would receive up to $10,000 in debt forgiveness. Pell Grant recipients will get up to $20,000 under the plan, which will also extend the pause on student loan payments through December 31, 2022.

The plan sparked outrage among conservatives who questioned its effect on taxpayers and concern from economists about its impact on inflation. Some social media users responded by comparing student debt forgiveness to PPP loans, which were awarded to businesses in response to the Covid-19 pandemic. Many of those loans were later forgiven.

However, Shapiro has denied receiving the PPP loan shown in the posts -- and a tracking tool from ProPublica, a nonprofit US news outlet, shows it was awarded to a real estate broker who shares his name.

"So they found a person named Ben Shapiro who applied for and received a loan in Los Angeles in 2021," the conservative commentator said in an August 24 Twitter thread refuting the rumors. "As you may know, I am not a real estate agent or broker."

Social media users have also shared screenshots of PPP loans, some worth millions of dollars, supposedly awarded to Republicans who have spoken out against federal student debt forgiveness.

On August 25, the White House's official Twitter account posted a series of tweets calling out six representatives for receiving PPP loans that were later forgiven.

AFP independently verified that all six politicians are tied to businesses that received PPP loans.