Social media users, including US comedian Kathy Griffin, are sharing an image that appears to show a tweet from Donald Trump Jr asking his father's supporters to stay away from their Florida residence to "keep it clean." But the tweet is fabricated; it does not appear on the Twitter feed of the younger Trump, who confirmed he did not post it.

"While my Father loves almost all his supporters, please do not come to Mar-a-Lago to support President Trump," says the text in an image of the purported tweet, which Griffin shared August 14, 2022 on Facebook and Instagram. "We have many important people coming through the club and need to keep it clean."

The photo appears to show a post from the verified @DonaldJTrumpJr account. Griffin's Facebook caption says: "Yeah, lots of important spies and other violent felons will be dropping by quite a bit from now on." 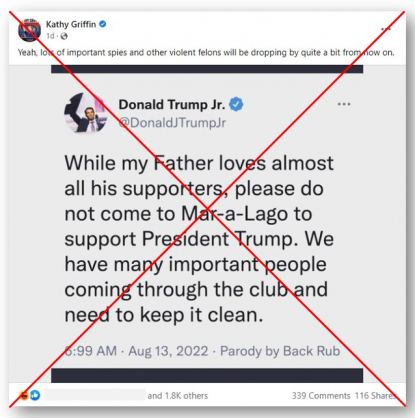 Versions of the image circulated on Twitter and other social media platforms as supporters of former US president Donald Trump gathered near Mar-a-Lago in Palm Beach, Florida after the FBI searched the residence to recover "top secret" documents.

The posts from Griffin and other high-profile accounts received tens of thousands of interactions, according to CrowdTangle, a social media insights tool.

But the post is fabricated, as Stern and others later acknowledged.

The made-up tweet appears to have originated from a satirical Twitter account called "Faith Back Rub," which says in its bio that "most of our images are satire." In a follow-up post referencing the image shared online, the account said: "This is a parody."

Other clues in the image also indicate the post is fabricated, such as the supposed tweet's timestamp -- "6:99 AM" -- and text that says "Parody by Back Rub."

Trump Jr's Twitter feed does not include a post urging his father's supporters to steer clear of Mar-a-Lago. AFP found no tweets resembling the one shared online in archived versions of his account, either.

The younger Trump said in an August 16 tweet that the fabricated post "was clearly something I would never say and would be derogatory to our incredible supporters."

AFP reached out to the Trump Organization for additional comment.

AFP has fact-checked other fabricated tweets here, here and here.