Skip to main content
The seal of the Federal Bureau of Investigation is seen outside of its headquarters in Washington, DC on August 15, 2022 ( AFP / MANDEL NGAN)

Social media posts are promoting an Instagram account they say published a leaked phone call between US President Joe Biden and the Federal Bureau of Investigation (FBI) that "proves" a search of former president Donald Trump's Mar-a-Lago residence "was unlawful." This is false; AFP found no such recording, and social media experts say the claims may be an attempt to increase followers.

"BREAKING: A call between the head of the FBI and Biden has been leaked which proves the raid on Mar-a-Lago was unlawful," says a tweet shared in an August 11, 2022 Instagram post. "Biden is doing everything to make sure this call gets covered up. Instagram account @red.wave1776 is the only place to find it. Follow now before it's deleted!" 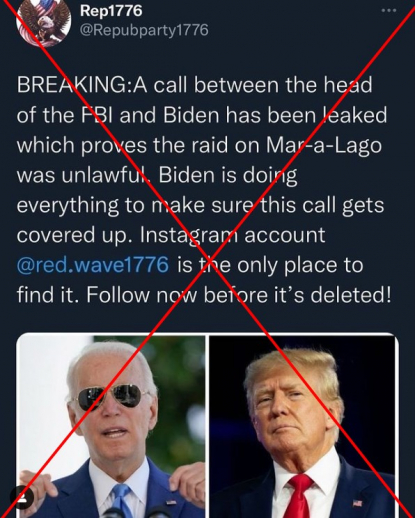 The claims come after the August 8, 2022 FBI search of Trump’s Palm Beach, Florida residence, which was reportedly focused on classified records the former president may have taken from the White House. The move sparked outrage among Trump supporters on social media platforms, as well as the spread of false claims.

But the Instagram page promoted in the post did not publish a leaked phone call between Biden and the FBI.

White House spokeswoman Karine Jean-Pierre said during an August 9 briefing that Biden and his staff first learned about the search -- which Attorney General Merrick Garland said he "personally approved" -- from public reports.

"No one at the White House was given a heads-up," she said.

AFP investigated @red.wave1776, the private Instagram account that purportedly shared a leaked tape. The page has more than 279,000 followers and links to a website selling pro-Trump merchandise.

The Instagram account has not published any such audio, AFP found. No credible media reports have surfaced a leaked recording, either. 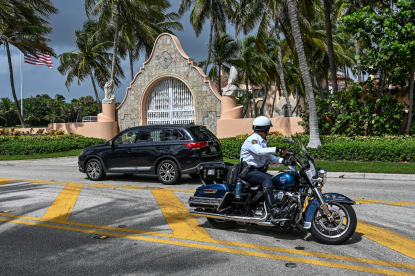 "Asking people to follow an account for exclusive information that can’t actually be delivered is blatant deception," said Yini Zhang, assistant professor of communication at the State University of New York at Buffalo.

Zhang said there are two ways to interpret this behavior: "a desire to influence public opinion and a drive to harvest followers."

"When the account claimed that someone else could show proof that the FBI raid was unlawful, the gullible (willingly or not) minds can latch onto this claim to affirm their existing view (that Trump is the victim of the FBI's political persecution)," she said.

"Often you see this sort of tactic that you're seeing here used by meme accounts, where they kind of draw a lot of people through some sort of unbelievable deal, offer or insights to tempt them to follow an account or request to follow it," he said.

Once those accounts gain a following, Navarra said, they often promote other pages or information. Sometimes they change their focus entirely.

AFP has fact-checked other claims about the FBI's search of Mar-a-Lago here and here.