After Pakistan opposition politician Sheikh Rasheed Ahmed accused police of raiding his home and party office, Facebook and Twitter posts shared a photo purportedly showing him hiding from police in hospital. However, the photo was taken in June 2020 when Ahmed was treated for Covid-19. He has appeared in public in August 2022 after claims about him hiding circulated.

"The one who sets parliament on fire and gives open threats to institutions, Sheikh Rasheed has made the excuse of being sick and is hiding in a hospital," reads an Urdu tweet posted on August 11.

The tweet, shared by an account with more than 110,000 followers, shows a photo of Ahmed in a hospital bed.

Ahmed is a vocal critic of the ruling coalition that took power after ex-prime minister Imran Khan was booted from office in April. 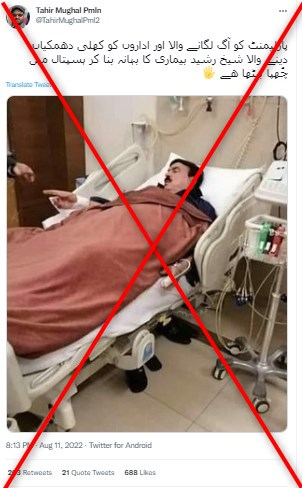 The photo was shared online, including on Facebook and Twitter, after Ahmed accused police in the capital Islamabad of raiding his home and AML's offices.

Police denied raiding his home, but did not comment on the alleged raid on AML's offices.

Police have raided the homes and offices of a string of opposition party members since Khan's ouster.

"Sheikh Rasheed reached the hospital for treatment out of fear of being arrested," one user wrote in Urdu.

Another described Ahmed as the "devil of Pindi", referring to the ex-minister's constituency, and accused him of "faking an illness" in light of "Shahbaz Gill's situation".

A reverse image search found the photo in a report from Pakistan's Dunya News published on YouTube on June 14, 2020.

The photo is shown at the 42-second mark, when the anchor says in Urdu: "Infected with Covid, Sheikh Rasheed has been admitted to a hospital".

The photo can also be seen at the 02:35 mark in a segment about Ahmed's illness by Pakistan's ARY News published on the same day.

Below is a screenshot comparing the photo in the posts (left) with the one from Dunya News (right):

Screenshot comparing the photo in the posts (left) with the one from Dunya News (right).

Ahmed dismissed claims he was hiding in hospital in a press conference on August 12, in which he said the photo circulating online was old.

"My photo from the corona times has gone viral. These people wish I was dead," he said.

Pakistan's Geo News reported on the press conference in an article showing the photo circulating in a false context.

Ahmed has made public appearances since the false claim surfaced. Videos on his Facebook page here and here show him holding a rally outside his Rawalpindi residence on August 13, the eve of Pakistan's independence day.