Facebook posts carrying a screenshot of a tweet purportedly sent by former US president Donald Trump expressing support for Kenya’s Deputy President William Ruto in the next general election are being shared in Kenya. The claim is false: the tweet was fabricated and appeared on July 23, 2021, several months after Twitter permanently suspended Trump’s account for violating the platform’s policy.

The screenshot also contains what appears to be a tweet sent by Ruto in reply and says. “Am so glad the whole world can see how we are transforming our great nation with wheelbarrows (sic).” 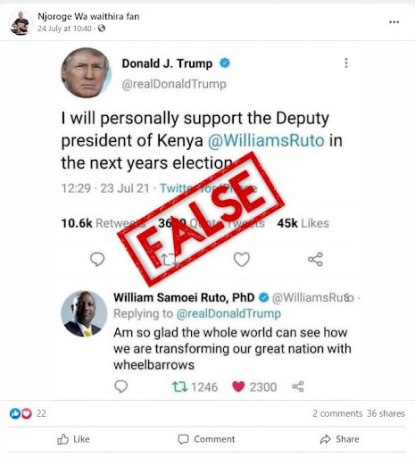 Ruto’s “reply” refers to a campaign strategy he has been using to drum up support among Kenyan youth before the August 2022 presidential election.

In a bid to identify with them, he has adopted the nickname “hustler” and is donating wheelbarrows, claiming this will help create self-employment for young people. Kenya’s long-term unemployment rate among youth aged 20-24 stands at 7.3 percent.

The same screenshot was shared in other Facebook posts here and here.

However, both tweets are fabricated.

Trump’s official Twitter handle, @therealDonaldTrump, was permanently suspended on January 8, 2021, “due to the risk of further incitement of violence”. The decision came shortly after Trump supporters stormed the US Capitol during a session of Congress to certify the November 2020 election results, including President Joe Biden’s win over Trump.

Trump has not had access to Twitter in his own name since his suspension and could not have tweeted his support to Ruto on July 23, 2021, from his old account.

A closer look at the tweet reveals another inconsistency.

Written in grey font below the tweet’s text is the descriptor: “Twitter for IPhone”. This identifies the device used to send a tweet.

However, an uppercase “I” has been used instead of a small “i”, which is the correct spelling for iPhone and how it appears on Twitter. 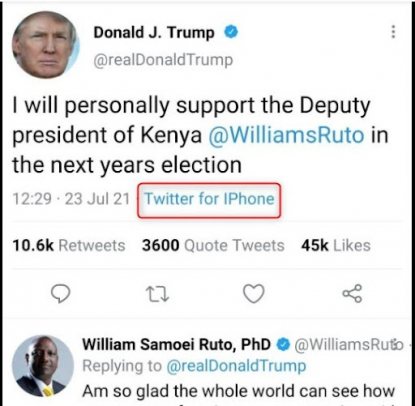 A screenshot showing inconsistency in the fabricated tweet, taken on July 28, 2021

Additionally, AFP Fact Check went through all of Ruto’s tweets and replies posted since July 23, 2021, and found nothing matching the response to the purported tweet from Trump.