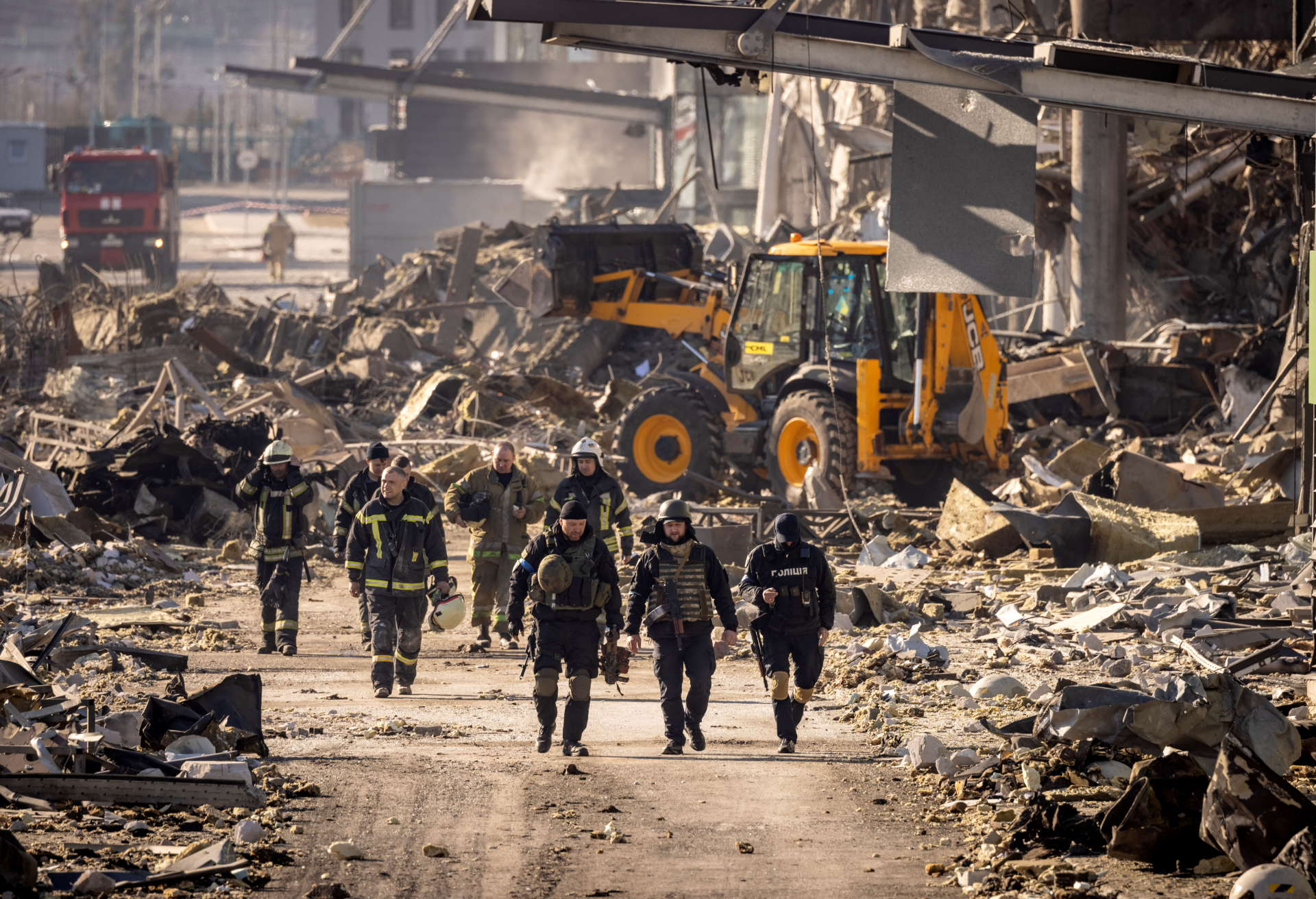 Ukrainian firefighters work next to a digger amid the rubble of the Retroville shopping mall, a day after it was shelled by Russian forces in a residential district in the northwest of the Ukranian capital Kyiv on March 21, 2022 ( AFP / FADEL SENNA)

Multiple social media posts claim CNN fabricated a story about a "bomb attack" at the hotel of a journalist in Ukraine in a tweet that actually showed an old photo of a hotel in Serbia. However, CNN reported no such story and said the tweet was fake. The screenshot of the doctored tweet features the social media handle of a prankster who has previously shared fake CNN tweets.

"CNN posted saying its reporters were staying at this hotel that was mercilessly bombed by the Russian military," reads a Korean-language Facebook post shared on March 22.

"It turns out it's a hotel construction site in Serbia where work has been halted due to a lack of investors. Do you still believe the mainstream media?"

The Facebook post appears to show a screenshot of a tweet from the account "CNN Breaking News", which reads: "These are the remains of the once famous ukrainian resort hotel Peace after the air attack by russian bombers #StandingWithUkraine".

The screenshot also features the profile picture of a social media account belonging to a "Majk Majkonski". 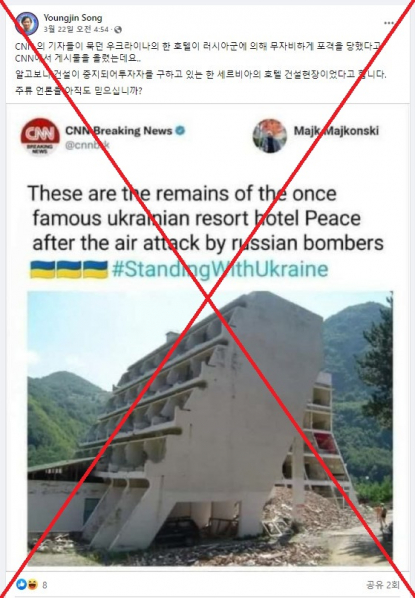 Screenshot of the misleading claim shared on Facebook, taken on March 24, 2022.

More than four million Ukrainians have fled the country since Russia's invasion on February 24, the United Nations said, as shelling continued in the capital Kyiv and the northern city of Chernigiv, despite Russia promising to scale back military activity there.

The conflict has triggered a wave of disinformation, including multiple fake tweets attributed to CNN here and here.

"CNN did not publish that photo or text as it relates to our ongoing coverage of the war in Ukraine," CNN publicist Matt Dornic told AFP on March 23.

AFP found no trace of the tweet on CNN Breaking News's official account and it has not reported on a hotel used by journalists in Ukraine being bombed, of March 25.

Meanwhile, a search of social media accounts belonging to "Majk Majkonski" found no trace of the fake tweet.

A reverse image search on Google found the photo in the fake tweet published in a Serbian-language Blogspot post on April 22, 2010.

The blog named the hotel in the photo as "Hotel Mir" -- which translates as "peace" in various Slavic languages -- and said it was located at the Zvonačka Banja spa near the town of Zvonce in eastern Serbia.

Below is a screenshot comparison of the photo shared in the misleading social media posts (left) and the image shared on Blogspot (right).

The blog said a new owner who announced plans to renovate the hotel stripped away all fixtures and fittings, including windows, pipes and radiators, before leaving it deserted.

Serbian media reported on the abandoned hotel here and here and showed photos of the dilapidated building similar to the one in the fake tweet.

While AFP found a hotel called Mir located in the Ukrainian capital Kyiv, the building does not resemble the one in the fake CNN tweet.

AFP has debunked more misinformation around the Ukraine conflict here.