A video that appears to show explosions in the French capital of Paris has been viewed thousands of times in misleading social media posts that claim it shows a real attack on the Eiffel Tower. The posts suggest the attack was carried out by Russian forces in response to sanctions from foreign powers following its invasion of neighbouring Ukraine. The footage, however, has been shared in a false context: it shows a fictional film created by a French director that was then shared online by Ukrainian officials in a bid to urge European authorities to impose a no-fly zone over Ukraine.

The video purports to show a woman posing for a photo in front of the Eiffel Tower before it appears to be hit by an explosion.

A fighter jet then appears to fly overhead.

Indonesian-language text overlaid on the video translates to English as: "EIFFEL TOWER BOMBARDED". 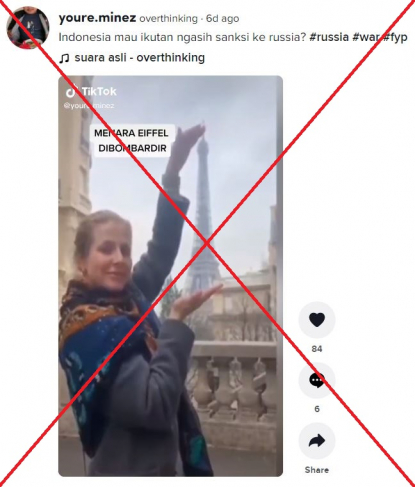 The caption reads: "Does Indonesia want to participate in imposing sanctions on Russia?"

The video was viewed more than 12,900 times in posts with a similar claim on TikTok here, here and here; on YouTube here and here; and on Facebook here.

The posts circulated after Western powers, including the European Union, imposed sanctions on Russia following its invasion of neighbouring Ukraine, AFP reported here.

However, the footage is being shared in a false context.

Keyword searches found a longer version of the video was shared here by the Ukrainian parliament's official Twitter account on March 11, 2022, local time.

The post's caption reads: "Would the famous Eiffel Tower in #Paris or the Brandenburg Gate in #Berlin remain standing under endless bombing of Russian troops? Do you think that does not concern you?

"Today it’s #Ukraine, tomorrow it will be the whole of #Europe. Russia will stop at nothing."

Would the famous Eiffel Tower in #Paris or the Brandenburg Gate in #Berlin remain standing under endless bombing of Russian troops?
Do you think that does not concern you?
Today it’s #Ukraine, tomorrow it will be the whole of #Europe. Russia will stop at nothing. pic.twitter.com/vi6z5UWV8q

The end of the video also includes text which reads in part: "Just think if this were to happen in another European capital ... Close the sky over Ukraine, or give us air fighters."

Ukrainian President Volodymyr Zelensky has urged NATO and the United States to impose a no-fly zone over his country.

'A film about a possible future'

French newspaper Le Monde reported on March 14, 2022, that the video was created by Olias Barco, a French screenwriter, director and film producer based in the Ukrainian capital of Kyiv.

Below are screenshot comparisons of the video in the misleading post (left) and the genuine video uploaded on Instagram (right): 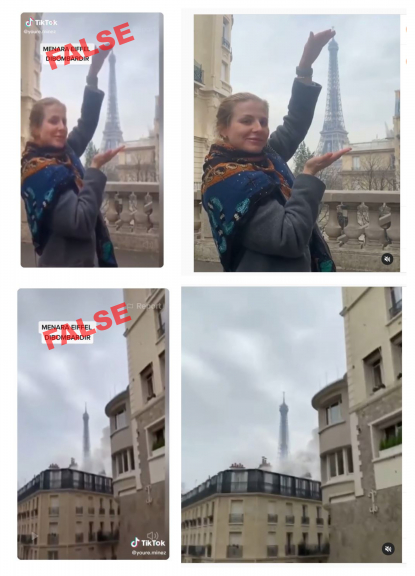 Barco told Le Monde that he had not been asked by the Ukrainian government to make the video but he — along with producer Jean-Charles Lévy — created it of their own accord "to give the West a wake-up call".

"In my opinion, we're living through a Third World War and this conflict will become more widespread," he said. "This is a film about a possible future, not a propaganda film."

AFP also debunked misleading claims circulating in Serbian that the video is an example of false information produced and disseminated by Ukrainian officials.