Skip to main content
Armed man walks past a burned military vehicle at a checkpoint in the city of Brovary in Ukraine on March 1, 2022 ( AFP / Genya Savilov)

Social media posts claim CNN lied to the public by tweeting that a man was the first US casualty in Ukraine after previously featuring the same photo in a post about his execution in Afghanistan. This is false; the network says the tweets are not from its official accounts, and the man pictured is a YouTube video game commentator who continues to livestream on the platform.

"Wow!! The same person that was 'executed' by the Taliban in Afghanistan is also the first American casualty in the 'Ukraine Crisis.' See how that works? CNN is the enemy of the people," says the text of a February 25, 2022 Facebook post that includes images of tweets from the handles @CNNUKR and @CNNAfghan.

The tweets both feature the same photo of a bald, bearded man wearing glasses standing in front of a house. In one, the alleged CNN Afghanistan Twitter account mourns the death of journalist Bernie Gores, executed in Kabul by the Taliban, while in the other, the alleged CNN Ukraine account recounts the end of activist Gores, who stepped on a mine planted by Russian-backed separatists. 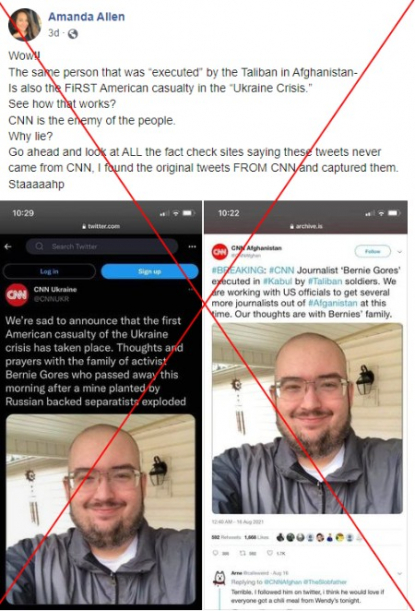 Social media posts featuring images of the same tweets appeared in French, German, Spanish, and Portuguese in the days after the February 24 Russian invasion of Ukraine. One of Moscow's UN envoys, Dmitry Polyanskiy, also denounced the "lies and fakes" of the mainstream media in a tweet featuring the images.

But CNN spokesperson Jonathan Hawkins told AFP on February 28 that the Twitter accounts behind the tweets "are not official CNN accounts."

Both the accounts @CNNAfghan and @CNNUKR are currently suspended by Twitter.

An archived version of the alleged CNN Afghanistan account, a tweet from which was previously debunked in August 2021, shows that the account was created in May 2021, only had 132 followers, and was not verified, unlike official CNN Twitter accounts.

An archived version of the similarly unverified CNN Ukraine account shows that the dead journalist tweet was published on February 23, 2022, and that the account only had 129 followers.

"Bernie Gores" is a fictitious name meant to sound like a racial slur that is used on online message boards. AFP found posts using it as far back as August 2020, when an account posted the same name and photo to report a man missing after the Beirut port explosion that month.

The person in the photo is real. He is known as Jordie Jordan, and is a controversial YouTube video game commentator. His publicly edited Wikitubia biography notes that Jordan has been the subject of various controversies and is a recurring target of online harassment.

Some followers of Jordan recently asked him about the latest fake reports of his death in comments posted to a video streamed live on his account on February 26, 2022, days after his alleged death. Jordan did not react to these questions, though his account continues to stream videos on YouTube.

Spreading false claims about online personalities following global news events is not a new method of online harassment. AFP has debunked similar claims about a German YouTuber who was falsely said to be a wanted murderer.

Other AFP fact checks about the Ukraine conflict can be found here.