A photo has been shared on Facebook in Kenya alongside a claim that it shows a couple with fertility issues having sex in a church in the presence of other churchgoers. But the claim is false: according to the Brazilian parish where the event took place, the photo shows a religious ritual aimed at healing a sick woman.

It claims that the couple had been trying to have children for 10 years and sought the help of a church minister who asked them to have sex on the altar. 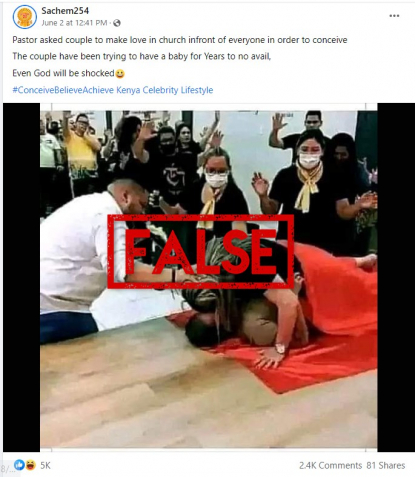 The photo shows two people covered with red fabric lying on top of each other. In the background, onlookers have their hands raised.

But the photo does not show a couple having sex in church.

A reverse image search conducted by AFP Fact Check found that the photo was taken at the Alianç Restaurada church, located in Belém in northern Brazil.

In a statement, the church said the image did not show a man and a woman during sex but two female clerics during a healing ritual.

The church said that getting a female minister to lay on top of the sick woman is a “prophetic act” borrowed from the Bible where Prophet Elisha lay on the body of a dead boy while praying to God to bring his spirit back to life.

"When Elisha reached the house, there was the boy lying dead on his couch. He went in, shut the door on the two of them and prayed to the Lord. Then he got on the bed and lay on the boy, mouth to mouth, eyes to eyes, hands to hands. As he stretched himself out on him, the boy’s body grew warm. Elisha turned away and walked back and forth in the room and then got on the bed and stretched out on him once more. The boy sneezed seven times and opened his eyes"

In a video shared along with the church’s statement, a woman who introduces herself as a bishop named Thais explains that the ritual was performed during a mass to aid an ill pastor.

"Pastor Domingas, who came from Bagre, had been ill for several days,” she said. "God guided Pastor Icaro, who performed a prophetic act”.

Following tradition, the pastor would have asked a deaconess — a woman in the Protestant order dedicated to assisting the church ministry — to "lie on top of her, to perform this prophetic act".

The pastor, the deaconess and the sick woman are all identifiable in a live video broadcast on the church's Facebook page on May 18. A side-by-side comparison of the image used in the false post and the video broadcast shows the same two women in black and grey clothing and the man wearing a white shirt. The same red cloth covering also appears in both videos.

This image was also debunked in early June by CongoCheck, a fact-checking organisation in the Democratic Republic of Congo.