Footage of crowds marching in the street has been viewed tens of thousands of times in Facebook posts that claim it shows a rally in the Indian city of Jammu in support of a ruling party official whose comments about the Prophet Mohammed sparked uproar in Muslim countries. However, the video shows a Hindu procession in a different city before the row over Nupur Sharma's comments.

"Hindus of Jammu came out in support of Nupur Sharma. Now the world will see the unity and strength of Hindus," reads a Hindi-language Facebook post from June 13.

The video, which has more than 100,000 views, shows crowds dressed in saffron, the colour of Hinduism, marching down a street.

India's ruling Hindu-majority Bharatiya Janata Party suspended firebrand official Nupur Sharma after televised comments she made on May 26 about the relationship between the prophet and his youngest wife sparked protests in India and across the Muslim world.

However, there have been no credible reports about a rally in Jammu in support of Sharma following her remarks. 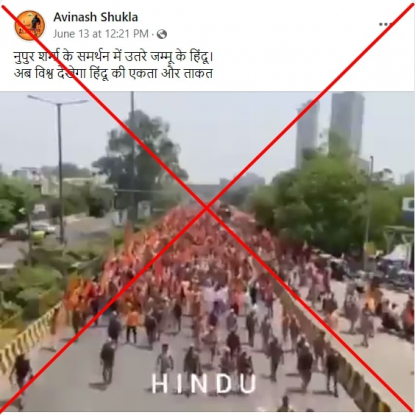 A Google reverse image search of keyframes from the video found the footage posted on April 18 -- weeks before Sharma's remarks about the prophet -- on the Facebook and YouTube pages of right-wing Indian organisation Vishwa Hindu Parishad.

Noida is a city in India's Uttar Pradesh state and located more than 600 kilometres (370 miles) south of Jammu.

Below is a screenshot comparison of the video in one of the false posts (left) and the video shared by Vishwa Hindu Parishad on Facebook (right):

Hanuman Jayanti is a Hindu festival that celebrates the birth of the Hindu god Hanuman. It was held in Noida in April, Indian news channel News18 reported.

Furthermore, the buildings in the video correspond to Google Street View imagery taken along Dadri Main Road in Noida.

An AFP journalist who visited the same location in Noida said it corresponds to the video shared with the false claim.

Below shows a screenshot comparison of the video falsely claimed to be Jammu (left) and a photo taken in Noida by an AFP journalist (right):

AFP has previously debunked a string of false claims around the Sharma row, including here and here.