A video has been viewed thousands of times in Facebook posts that claim it shows millions of Muslims taking to the streets in India to protest over remarks made by a ruling party official that were seen as insulting to the Prophet Mohammed. However, the video actually shows a birthday celebration for the prophet held in Yemen in 2019, and its audio is from a Hezbollah leader's speech in 2012 that warned of "dangerous repercussions" if an anti-Islam film was released.

The one-minute 16-second video was posted here by a Pakistan-based Facebook user on June 7, 2022, and has since been viewed more than 9,000 times.

It circulated as Muslims took to the streets in huge protests around Asia, sparked by firebrand politician Nupur Sharma's comments during a televised debate about the Prophet's relationship with his youngest wife.

Sharma -- who was a regular fixture on Indian television, where she acted as a mouthpiece for the ruling Hindu nationalist Bharatiya Janata Party (BJP) and a combative advocate for Prime Minister Narendra Modi -- was suspended by the party for the remarks.

The video circulating on social media shows an aerial view of a large procession, and is accompanied by Arabic-language audio with superimposed text giving an Urdu-language translation.

"And our empty homes will bear witness, until the last drop of our blood, that we shall not sit silently in the face of the messenger of God's disrespect," reads part of the translation.

The video was viewed thousands of times in similar Facebook posts here, here, here and here.

A reverse image search led to a 36-second video posted on YouTube here on November 10, 2019 by the Ansar Allah Media Center.

"Ansar Allah" is the official name of Yemen's Iran-backed rebel Huthi movement, which took over Yemen's capital Sanaa in 2014.

"The full moon has risen upon us. Yemenis are the supporters of the greatest prophet on the anniversary of his birth," the video's Arabic-language title reads.

The video corresponds to the first 36 seconds of the video in the false posts.

Below is a screenshot comparison of the video in the false posts (left) and the YouTube video from 2019 (right): 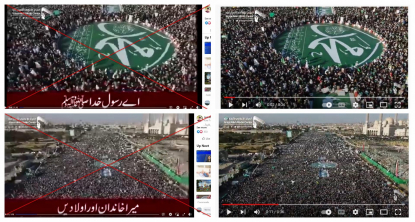 The footage from the YouTube video is then played backwards in the second half of the video in the false posts.

A subsequent keyword search found parts of the video correspond to this footage from AFP, also published on November 10, 2019.

Neither video contains the audio heard in the clip in the false posts.

A keyword search for the Arabic-language audio found this report published on September 17, 2012 by Lebanese broadcaster Al-Manar, which is owned and operated by the Shiite militant group Hezbollah.

"His Eminence, the Secretary-General of Hezbollah, Sayyed Hassan Nasrallah, appeared among the crowds of demonstrators in the march of loyalty to the Prophet Mohammed," the Arabic-language report reads.

AFP reported at the time that Nasrallah had given a televised speech warning of "dangerous repercussions" if an anti-Islam film was released in its entirety. The release of the film's trailer had caused an eruption of anger across the Muslim world.

Parts of the speech were uploaded here on YouTube at the time. The audio used in the false posts can be heard between the 11-second and the one-minute and 26-second mark.