Skip to main content
The president of the Philippines Rodrigo Roa Duterte (C) waves upon his arrival in Jerusalem at the start of an official visit to Israel, on September 2, 2018. ( AFP / MENAHEM KAHANA)


A video with tens of thousands of views falsely claims the Philippines is "debt-free" after outgoing President Rodrigo Duterte settled a multi-billion dollar loan in May, a development that the video accuses local media of ignoring. However, data from the Philippine treasury show the claim is baseless, while various news organisations reported on the loan payment that only covered a fraction of the country's total debt.

"The Philippines is now debt-free! Duterte settled them! But this was not reported by ABS, GMA, Rappler!" reads the Tagalog-language title of a video posted on YouTube on May 22.

The video, which has more than 54,000 views, shows a woman making the same claim.

She accuses media organisations ABS-CBN, GMA News and Rappler of "bias" against Duterte and says they failed to report that his outgoing government settled a 300-billion peso ($5.6 billion) loan to the country's central bank in May.

"You are so biased. You don't want Filipinos to know about Duterte's achievements," she says. 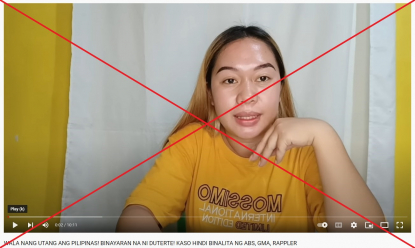 Duterte's term ends in June, when he will be succeeded by Ferdinand Marcos Jr, the son and namesake of the country's late dictator, who won a landslide victory in the presidential election in May.

The same video was also shared on Facebook here and on a blog here.

Comments suggest some people were misled by the video's false claim.

"I only learned through your vlog that all the Philippines' debt has already been paid off! We never saw this on the news, good for you for being an honest vlogger," one social media user wrote.

"The mainstream media is biased! Why didn't you report about this?" said another.

Responding to the posts, a representative for the Philippine Bureau of Treasury, which manages the country's debt portfolio, said the claim was false.

"It's obvious that it is not true. We still have debt," the spokesperson told AFP on June 15.

The country's outstanding debt has been registered at 12.76-trillion pesos ($240 billion) according to a June 2 report from the treasury bureau.

A press release issued by the Philippine finance department about the Duterte government's payment of the 300-billion pesos loan to the central bank in May does not indicate the entire national debt had been paid.

Google keyword searches found that GMA News and ABS-CBN reported on the loan payment, although Rappler did not.