Skip to main content
This photo taken on April 22, 2021 shows the Tokyo Tower from rooftop of the Roppongi Hills Mori Tower in Tokyo. The seemingly endless sprawl of Tokyo can be hard to take in from the ground. But sky-high observation decks dotted across the Japanese capital offer a fresh perspective. ( AFP / Yuki IWAMURA)

A Korean-language YouTube video with more than 250,000 views has been shared in Facebook posts that claim the iconic Tokyo Tower in Japan was damaged by a massive explosion on May 29, 2022. However, the claim is false; a spokesperson from the company that operates the tower told AFP no such explosion occurred. There have been no reports or official announcements about any major accident in the vicinity of the tower.

Korean-language narration claims the explosion occurred in "an underground machine room below Tokyo Tower for unknown reasons" on May 29, distorting several sections of the tower by a few degrees.

The narrator claims 18 people were severely burned in the purported explosion, which "destabilised the ground", causing it to crack or rise up in neighbourhoods around the tower.

The 12-minute video contains various stock images and footage of Tokyo Tower and the capital city, as well as clips unrelated to Japan or the claim. 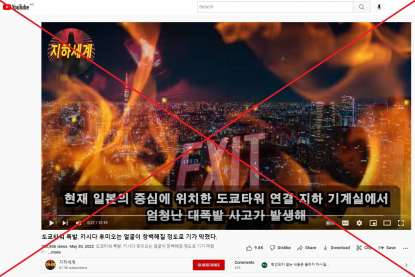 The Tokyo Tower, located in Japan's capital, was completed in 1958 as a broadcasting tower and observatory that draws 10,000 tourists a day, according to the government.

Comments on the YouTube video indicated several users believed the claim was genuine.

"Accidents seem to happen [in Japan] every day... it is an endless reality," one user wrote.

Another said, "Looking at all these strange accidents that happen in Japan, it seems like they have a lot to be penitent for."

AFP could not find any reports or official announcements from Japanese authorities about an explosion at the Tokyo Tower or around it on May 29.

A spokesperson at the Tokyo Tower Company, which manages the radio tower and tourist facilities, told AFP the claims made in the YouTube video were false.

The tower's official website does not mention any accidents in or near the landmark.

Its observation deck remains open, and tour bookings can be made through the website as usual.

The Tokyo Tower can be seen still standing intact in an AFP photo taken on May 30, 2022 from the Shibuya Sky observation deck. 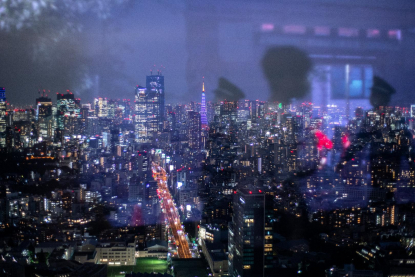 A general view shows the night scene with the landmark Tokyo Tower (C) from the Shibuya Sky observation deck, a tourist spot in Tokyo on May 30, 2022 as Japan earlier announced borders reopen to tourists on guided tours, starting June 10. ( AFP / Philip FONG)

Other claims about fires and accidents in Japan have previously circulated in South Korea and have been debunked by AFP here, here and here.