A photo has been viewed tens of thousands of times in Korean-language social media posts that claim it shows an explosion at a Japanese factory producing yen coins in Saitama prefecture, causing the country's currency to depreciate. This is false; the image shows a 2018 fire at a power station in the United States. Japan Mint told AFP there had not been a fire at its Saitama branch. The Japanese yen fell to a 20-year low in April 2022 partly because of a central bank policy that has kept bond yields low, AFP has reported.

It appears to show a blaze at an industrial facility.

Korean-language text superimposed on the image translates to English as: "Japan, massive explosion at yen currency factory; [Japan] requests emergency help from South Korea after the yen crashed due to the fire".

At the bottom of the image, the Korean-language text translates as: "Japanese response: 'Live video of Japan explosion'". 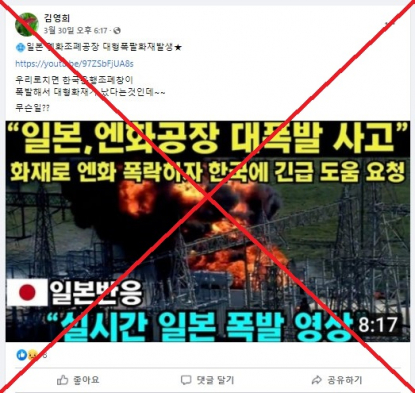 Screenshot of the misleading claim shared on Facebook. Captured April 7, 2022.

The image appears to be a thumbnail for this YouTube video viewed more than 36,000 times since it was posted on March 29, 2022.

Its Korean-language description translates as: "The current situation Japan faces after the yen crashed due to a shortage of bills, following a fire at its mint in Saitama Prefecture."

The video -- which features clips of a fire and other rescue footage -- includes a voiceover stating a large fire broke out for "unknown reasons" at the mint factory on March 28, causing the yen to depreciate.

The posts circulated online shortly before the yen hit its lowest level against the dollar in two decades, AFP reported.

The image was shared alongside a similar claim on Facebook here and on South Korean social media platform Naver Band here.

A spokesperson for the Saitama Branch of Japan Mint, the country's government agency responsible for producing coins, told AFP on April 12, 2022 that the claim about a fire was "completely groundless".

"The factory in the Saitama branch is operating as usual without any trouble," the spokesperson said.

A photo of the Saitama branch on the website does not resemble the facility shown in the misleading posts.

AFP has found no official reports or statements about a fire or other accidents at Japan Mint branches.

A Google reverse image search found the photo of the fire corresponds to a report published by KHOU, a television station in Houston, Texas, on May 8, 2018.

It is about a fire at the CenterPoint substation in nearby Texas City.

The photo is captioned: "Thick black smoke and heavy flames could be seen for miles from the CenterPoint substation in Texas City after a transformer caught fire Tuesday afternoon."

The report states a transformer had caught fire at the facility owned by CenterPoint, a natural gas and electricity utility company.

Below is a screenshot comparison of the photo used in the misleading posts (left) and a mirror image of the original photo taken by KHOU (right):

The fire was also reported by local outlet Houston Public Media on May 8, 2018.

Experts have said the currency depreciation was caused by the Bank of Japan's decision to continue keeping bond yields low along with higher energy and commodity prices, AFP reported.

On April 5, Japan's central bank announced it would continue to keep bond yields low to maintain economic recovery after the Covid-19 pandemic, even as central banks around the world have started raising interest rates.

AFP has previously debunked misleading claims about fires and accidents occurring in Japan that have circulated in South Korea, including here and here.